Hajj: The Conclusion - IslamiCity
Welcome to the world's oldest and most recognized Islamic Web site. Have a blessed Ramadan! Login/Sign Up

An aerial view of the Kabah at the Grand Mosque during the hajj pilgrimage in Mecca on December 31, 2006. Pilgrims from all over the world gather in the holy city of Mecca each year for the five-day hajj, which is a duty for every able-bodied Muslim at least once in a lifetime (photo: REUTERS/Ali Jarekji).
Category: Faith & Spirituality, Featured, Highlights Topics: Hajj, Iman (Faith And Belief), Jihad, Martydom, Monotheism, Prophet Ibrahim (Abraham), Satan (Iblis), Social Justice, Tawhid (Oneness Of God) Values: Freedom, Hope, Love, Sacrifice Channel: Hajj - Day 5 Views: 2184 2184

The time for staying in Mina is over and the ceremonies end near the border of Mecca. There is one more Tawaf and Sa'i that you can do anytime toward the end of Zul-Hijjah and if necessary you can do it before leaving for Arafat. Hajj ceremonies are over and this is all you are supposed to do.

Oh Hajj who is leaving Mina, the last stage of Hajj - you accepted Ibrahim's invitation. You escaped the vicious cycle of your individual life. You came on time to Miqat; you listened to the revelation; you took off your clothing and put on the white Kafan. You left your home and homeland and came as a guest to the house of God and the land of Jihad. You made a promise to God by shaking his right hand.

You entered the Tawaf circle and were lost amongst the people of Taef. You denied self- centeredness. You purified yourself. You tried your best to search for "water" on top of the mountains. Then you descended to Arafat from Mecca and from stage after stage (going to Mashar and Mina), you returned to Allah (returned to Mecca).

You gained "consciousness" in the sunshine of Arafat. You collected your arms in the darkness of Mashar. Simultaneously, with others you passed the border of Mina. Satan was defeated by your first attack. You became free and saved the land of faith and love. You held the position of Ibrahim and ascended to the peak of honor - the stage beyond Shahadat.

Finally, you sacrificed a sheep at the end of this effort! 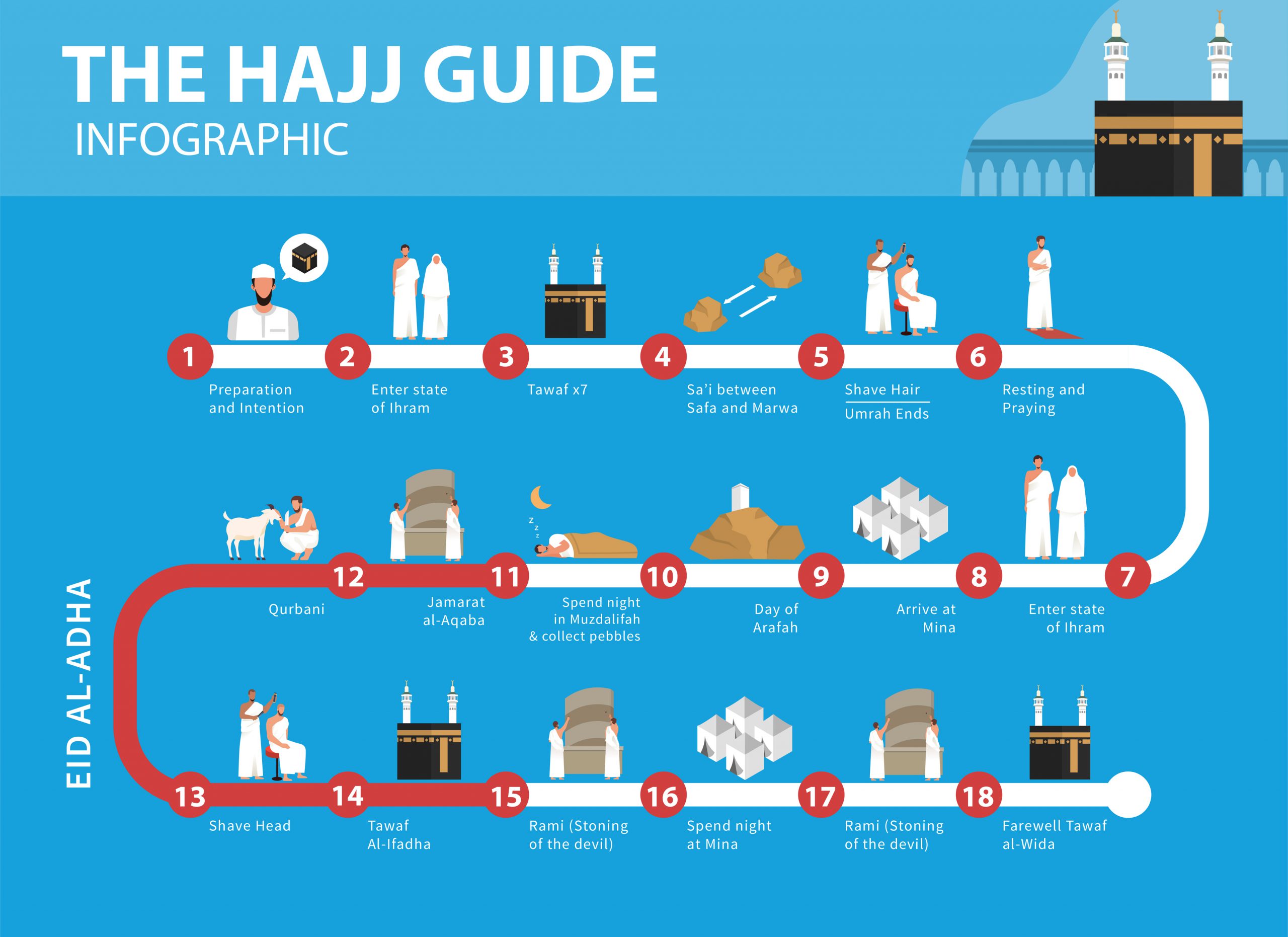 Where do you arrive at the end of this greatest holy trip and highest degree of human ascension after going through the most dangerous and fearful passages of creation - Tawheed (unity), Ithar, Jihad (struggle), Shahadat (martyrdom), fighting with Eblis (Satan) and conquering the land of love? What do you do? Sacrifice a "lamb"! Why? What is its philosophy? What is the mystery? What does sacrificing a lamb at the end of Hajj mean? I cannot say! Let Allah himself answer this question:

Eat thereof and feed the beggar and the suppliant. Quran 22:36

Then eat thereof and feed there with the unfortunate poor. Quran 22:28

(i.e. To fight with poverty. At the end of this trip, give a piece of what you eat to relieve a hungry man and help an oppressed person. That's all!)

Oh Hajj - where are you going now? Back home to your life and to your world? Are you returning from Hajj the same way you came? Never! Never! You played the "role of Ibrahim" in this symbolic show! A good actor is he whose personality is fully impressed by the character of the individual who is playing his role. If he does well, the show will be over but his work is not done yet. There have been many actors who did not survive the act they played and died!

You played the role of Ibrahim, not just to play but to worship and to love. Do not return to play your role after playing the role of Ibrahim! Do not leave the house of people. Do not isolate yourself. Do not replace your Ihram with your previous clothing. Leave Mina for Mecca and take your Ismail with you!

You are like Ibrahim who in the history of mankind was a great fighter against idolatry. He was the founder of unity in this world and had the responsibility of leading his people. He was a rebellious leader whose soul was suffering, whose heart was loving, whose thoughts were enlightening and ...

The axe was in his hand! Faith was raised in the hearts of the Kofr (unbelief) and monotheism flourished in the midst of polytheism. Ibrahim, the fighter of idolatry, came out of the house of "Azar", the idol-maker of his tribe.

He broke the idols; he broke Nimrood. He fought against ignorance, oppression and passiveness. He rebelled against the tranquility of suffering and the security established by persecution. He was a guide for his tribe and the founder of his movement, life, direction, hope, goal and faith of unity.

You are like Ibrahim! Fight the fire, the fire of oppression and ignorance so that you may save your people. The fire is in the fate of every responsible individual; it is your duty to guide and save. But ... Allah makes the fireplace of Nimrod and his followers a rose garden for Ibrahim and his followers. You will not burn or turn into ashes. This teaches you to be ready to jump into the fire for Jihad (Struggle)! And

... To teach, let yourself into the fire in order to prevent the people from burning. ... To the more painful stage of Shahadat.

You are like Ibrahim! Sacrifice your Ismail. Put the knife to his throat with your hands ... Save the throat of the people from being cut - the people are always sacrificed at the doors of palaces of power, and temples of torture. PUT THE BLADE AT YOUR SON'S THROAT SO THAT YOU MAY TAKE THE BLADE FROM THE EXECUTIONER'S HAND!

But ... Allah will pay the ransom of your Ismail. You do not kill and do not lose your Ismail. THIS IS TO TEACH YOU THAT YOU SHOULD BE READY TO SACRIFICE YOUR ISMAIL (LOVE) IN YOUR OWN HANDS FOR THE SAKE OF YOUR FAITH! ... "to the more painful stage of Shahadat"! And now, Oh Hajj who is returning from circumambulating love, you are in the position of Ibrahim. You have reached the point where he did.

Ibrahim's life was filled with struggle when he reached this point - braking the idols, fighting with Nimrod, tolerating his fire, struggling with Eblis (Satan), sacrificing his Ismail, migration, homelessness, loneliness torture, passage from the stage of prophecy to the stage of leadership, going from "individuality" to "collectivity" and being from "the house of "Azar" to being "the builder of the house of unity" (Kaaba)!

At the end of his life, gray-haired and old, Ibrahim built the house of Allah and laid down the black stone. His helper Ismail carried the rocks and handed them to his father. How wonderful! Ibrahim and Ismail built the Kaaba. Ibrahim and Ismail, one was saved from the fire and one saved from being sacrificed. Both were representatives of Allah and were responsible to the people. They were the architects of the oldest temple of "unity" on this earth, and the first house of the people." The "free house," the house of love and worship (Haram), is a symbol of "heavenly privacy".

You are in "Ibrahim's position" - right where he stood. The very last step of his ascension, in Miraj, is the shortest distance toward Allah.

You, the builder of Kaaba, the architect of the "house of freedom", the founder of unity, the enemy of idolatry, the tribal leader, the fighter against oppression, ignorance and disbelief - now you build a house, not for yourself, not even a shelter for your son, not a house for "the people". It is a shelter for those homeless people who are wounded, tortured or victims of oppression and have no place to go. Nimrod is following them everywhere ... The Harem becomes a torch in the middle of this dark night and a cry amidst this damn oppression! It is secure, clean and free for mankind, the family of God. Everywhere else is insecure and shameful. The earth has become a huge polluted house of prostitution.

It is a slaughterhouse where everything but aggression and discrimination are forbidden. Now that you are standing in Ibrahim's position and are going to play his role, live like him, be the architect of the Kaaba of your faith. Rescue your people from the lagoon of their life. Re-breathe life into their bodies that are numb and dead from the suffering of oppression and the darkness of ignorance. Encourage them to stand on their feet and give them direction. Call upon them to come to Hajj, to Tawaf (circumambulating). After entering Tawaf, denying selfishness and purifying yourself to adopt the characteristics of Ibrahim, you have promised God to follow his path. Allah is your witness.

- Make your land a secure land, since you are in a safe area.

- Change your time to a respectful time, as if you are always in the state of Ihram.

- Make the earth a sacred mosque, since you are in the holy mosque. Since the earth is the "mosque of Allah".

Excerpted from a section of the book "Hajj" by Dr. Ali Shariati and translated by Dr. Ali A. Behzadnia.

The Human in the Quran

Global Warming and Hajj in the Coming Decades

The Universe and State of the Ummah

Qur’an and Torah on the Origin of Judaism

Muhammad in The Bible

Why Believers’ Sins Are All Forgivable

The Spirituality of Hajj: Pilgrims’ Visit to Madinah

The Spirituality of Hajj: Conclusion

Hajj: The Delay in Mina

Unusual Eids in Unprecedented Times
COMMENTS DISCLAIMER & RULES OF ENGAGEMENT
The opinions expressed herein, through this post or comments, contain positions and viewpoints that are not necessarily those of IslamiCity. These are offered as a means for IslamiCity to stimulate dialogue and discussion in our continuing mission of being an educational organization. The IslamiCity site may occasionally contain copyrighted material the use of which may not always have been specifically authorized by the copyright owner. IslamiCity is making such material available in its effort to advance understanding of humanitarian, education, democracy, and social justice issues, etc. We believe this constitutes a 'fair use' of any such copyrighted material as provided for in section 107 of the US Copyright Law.