Three levels of ridha (contentment with God) - IslamiCity
Welcome to the world's oldest and most recognized Islamic Web site. Have a blessed Ramadan! Login/Sign Up

After explaining the meaning of ridha (pleasure or contentment with God), Shaykh Al-Harawi states in Manazil Al-Sa'irin that there are three levels of ridha.

The first level is the ridha of the spiritually common folk, which is to be pleased with Allah (ridha billah) as die Lord, and to be displeased with the worship of any but Him. This is the axis of all of Islam, which purifies one from the greater shirk. This level of ridha has three conditions:

That Allah the Exalted be
(1) dearer to the servant than all things,
(2) greater than all things in magnificence and reverence, and
(3) more deserving than all else in obedience.

(l) That all conditions [i.e., calamity or bounty, loss or gain] become the same to the servant,
(2) that the servant drops any claims against or animosity toward all else in creation, and
(3) that the servant abjures begging others or depending on others for anything.

The third level is to be pleased with Allah's pleasure (ar-ridha hi ridha Allah), which is that

(1) the servant does not see for himself any pleasure or displeasure,
(2) he abjures his own judgment altogether, and
(3) he gives up distinction [between pleasure and pain, calamity and bounty] even if he were to be entered into the fire.

Imam Ibn Al-Qayyim explains, as well, as he critically evaluates this discourse at length and offers important correctives. Parts of this explanation have been translated as follows. Imam Ibn Al-Qayyim basically argues for the superiority over all others of what Shaykh Al-Harawi calls the first level, which is suitable for just the spiritually common folk [that is, those who have not undertaken a program for systematic spiritual progression], This is in accordance with the general teaching of Ibn Al-Qayyim and his teacher Ibn Taymiyyah that the best faith and practice are those that are given in the Qur'an and the Sunna and are known to all Muslims, rather than the esoteric and secretive practices that only a few elite claim to know.

Shaykh Al-Hawari makes [the second level] higher than the one before it because, in his view, one does not enter into Islam except by accomplishing the first level [which is to be pleased with Allah as his one Lord]. The second level, however, he considers to be among the matters of the heart, which are the province of the spiritual elite, that is, to be pleased with Allah's decrees and predestination for the servant. This ranking, however, is questionable. Indeed, the first level should be considered greater in value and significance.

[Firstly,] the initial level is specific to the believers alone; that is, only they are pleased with Allah as their One Lord. As to the second level, both believers and non-believers may share it, in that they all ultimately accept what God destines for them.

[Secondly,] to be pleased with Allah as one's only Lord is an obligation-indeed, it is the greatest of obligations, without which one's Islam is invalid, as are all other acts and worship. Being content with one's destiny, on the other hand, according to the majority opinion, is recommended and preferred, but not an obligation. Others hold that it is an obligation. Both of these opinions are found in the madh-hah of Imam Ahmad ibn Hanbal. The difference between the two levels, then, is the difference between an obligatory act and a recommended one, and in a divine hadith (hadith qudsi) we have been told that "My servant does not draw nearer to Me by anything he does as by fulfilling his obligations" (Bukhari and Ahmad). Thus, obligations are higher than recommendations in worth and significance.

[Thirdly,] to be pleased with Allah as the one Lord is inclusive of being content with His decree.

[Fourthly,] to be pleased with Allah as the Lord concerns the Being of Allah, His attributes and names, and His Lordship, generally. On the other hand, contentment relates to what Allah does and gives to the servant. Thus, to be pleased with Allah (ridha billah) is the foundation of being content with Allah's decrees (ridha 'an'illah) while the latter is the fruit of the former. The essence of the issue is that the first level, pleasure with Allah, concerns the names and attributes of Allah, while the second level, contentment, relates to His reward.

[Seventh,] Shaykh Al-Harawi makes a condition for this first level of ridha that Allah becomes to one more beloved than anything else, more revered than anything else, and more deserving of obedience than anything else. The perfection of love is the inclination of the heart to the beloved exclusively, which then leads to obedience and reverence, and the greater the inclination of love, the greater the obedience and reverence. What level can be higher than this level! It is this about which the Messenger of Allah, sallallahu alayhe wa sallam, says: "Three things are such that if found in one, he has tasted the taste of faith: that Allah and His Messenger are dearer to him that all else, that he loves someone for no other reason than for the sake of Allah, and that he hates to return to disbelief after Allah has saved him from it as he hates to be thrown into the fire" (Bukhari and Muslim).

This complete love for Allah and sincerity toward Him is higher than mere contentment with one's destiny and resignation to Allah's decree. 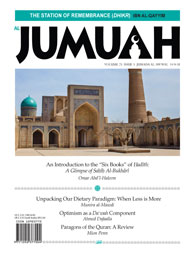 Article provided by Al Jumuah Magazine, a monthly Muslim lifestyle publication, which addresses the religious concerns of Muslim families across the world.

44 Self Improvement Lessons from Qur’anic Guidance

Self-Awareness: Impact on Nature and Humanity

How to Become God-Conscious (or Muttaqi)

Are We Achieving or Missing the Objectives of Fasting?

Ramadan: A Month for Reflection and Character Building

Ramadan: 12 Reasons To Fast!
COMMENTS DISCLAIMER & RULES OF ENGAGEMENT
The opinions expressed herein, through this post or comments, contain positions and viewpoints that are not necessarily those of IslamiCity. These are offered as a means for IslamiCity to stimulate dialogue and discussion in our continuing mission of being an educational organization. The IslamiCity site may occasionally contain copyrighted material the use of which may not always have been specifically authorized by the copyright owner. IslamiCity is making such material available in its effort to advance understanding of humanitarian, education, democracy, and social justice issues, etc. We believe this constitutes a 'fair use' of any such copyrighted material as provided for in section 107 of the US Copyright Law.