A New Book: My Father Was a Freedom Fighter: Gaza's Untold Story - IslamiCity
Welcome to the world's oldest and most recognized Islamic Web site. Have a blessed Ramadan! Login/Sign Up 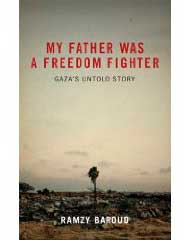 SEATTLE/TORONTO/LONDON - A promotional short film for a new book on Gaza is being released worldwide today, days before the official book launch in the U.K., to commemorate the first anniversary of the Gaza massacre - Israel's so-called Operation Cast Lead, which killed and wounded thousands in Gaza a year ago.

Told from the perspectives of the refugees, My Father Was a Freedom Fighter: Gaza's Untold Story is heralded as an incomparable chronicle of the history of the Gaza Strip, and has been endorsed by leading intellectuals and academics.

The book's author, Ramzy Baroud, was born and raised in a refugee camp in the Gaza Strip. He was witness to much of Gaza's tumultuous history. "Gaza's story is the most fascinating story there is, yet somehow it's reduced to a few simple, redundant, and misleading clichs that barely grab attention anymore," Baroud said. "I am determined to challenge and change that. Thanks to courageous publishers like Pluto Press, and the dedicated efforts of many talented individuals out there, we shall together change the ways the Gaza story is told."

The short film, carrying the name of the book, is being released on YouTube, in both English and Arabic versions. The film will also be broadcast on a number of TV stations around the world. The filmmakers and book author are calling on readers and activists around the world to ensure the widest possible dissemination of Gaza's untold story, by reading and helping to promote the book, and by encouraging others to watch the film at YouTube, through sharing the film with friends, family, and colleagues - with an aim to reach a million views at YouTube.

The "A Million Hits on Gaza" film-sharing movement at YouTube is just the beginning of a worldwide campaign to raise awareness of the book, and of Gaza's untold stories and history, a campaign that will also include readings, book tours, the screen adaptation of the book into a feature film, and various educational, grassroots, community, and international film festival screenings of the completed feature film.

The promotional short film was created in a matter of days, with zero budget, by a team of artists in Canada and the U.K. that included filmmakers Paul Lee and Cathy Gulkin, editor and screenwriter George Kaltsounakis, composer and jazz musician Gilad Atzmon, and with the collaboration of writer and journalist Hani Yared (who helped with the translation and the preparation of the Arabic version of the film).

The book is now available through the Pluto Press website (www.plutobooks.com), and also through Amazon.com. Beginning March 2010, the book will be distributed in the United States by Palgrave Macmillan, which is promoting the book as a 'trade title."

Hubris is Our Fatal Flaw

The True Face of Israel’s Bombing of Gaza

East Jerusalem: Can 'Status-quo' be Preserved?

The Voice of Palestine

Why Islamic civilization must be re-discovered
COMMENTS DISCLAIMER & RULES OF ENGAGEMENT
The opinions expressed herein, through this post or comments, contain positions and viewpoints that are not necessarily those of IslamiCity. These are offered as a means for IslamiCity to stimulate dialogue and discussion in our continuing mission of being an educational organization. The IslamiCity site may occasionally contain copyrighted material the use of which may not always have been specifically authorized by the copyright owner. IslamiCity is making such material available in its effort to advance understanding of humanitarian, education, democracy, and social justice issues, etc. We believe this constitutes a 'fair use' of any such copyrighted material as provided for in section 107 of the US Copyright Law.