By the time 'Abd al-Rahman reached Spain, the Arabs from North Africa were already entrenched on the Iberian Peninsula and had begun to write one of the most glorious chapters in Islamic history.

After their forays into France were blunted by Charles Martel, the Muslims in Spain had begun to focus their whole attention on what they called al-Andalus, southern Spain (Andalusia), and to build there a civilization far superior to anything Spain had ever known. Reigning with wisdom and justice, they treated Christians and Jews with tolerance, with the result that many embraced Islam. They also improved trade and agriculture, patronized the arts, made valuable contributions to science, and established Cordoba as the most sophisticated city in Europe.

By the tenth century, Cordoba could boast of a population of some 500,000, compared to about 38,000 in Paris. According to the chronicles of the day, the city had 700 mosques, some 60,000 palaces, and 70 libraries - one reportedly housing 500,000 manuscripts and employing a staff of researchers, illuminators, and bookbinders. Cordoba also had some 900 public baths, Europe's first street lights and, five miles outside the city, the caliphal residence, Madinat al-Zahra. A complex of marble, stucco, ivory, and onyx, Madinat al-Zahra took forty years to build, cost close to one-third of Cordoba's revenue, and was, until destroyed in the eleventh century, one of the wonders of the age. Its restoration, begun in the early years of this century, is still underway. 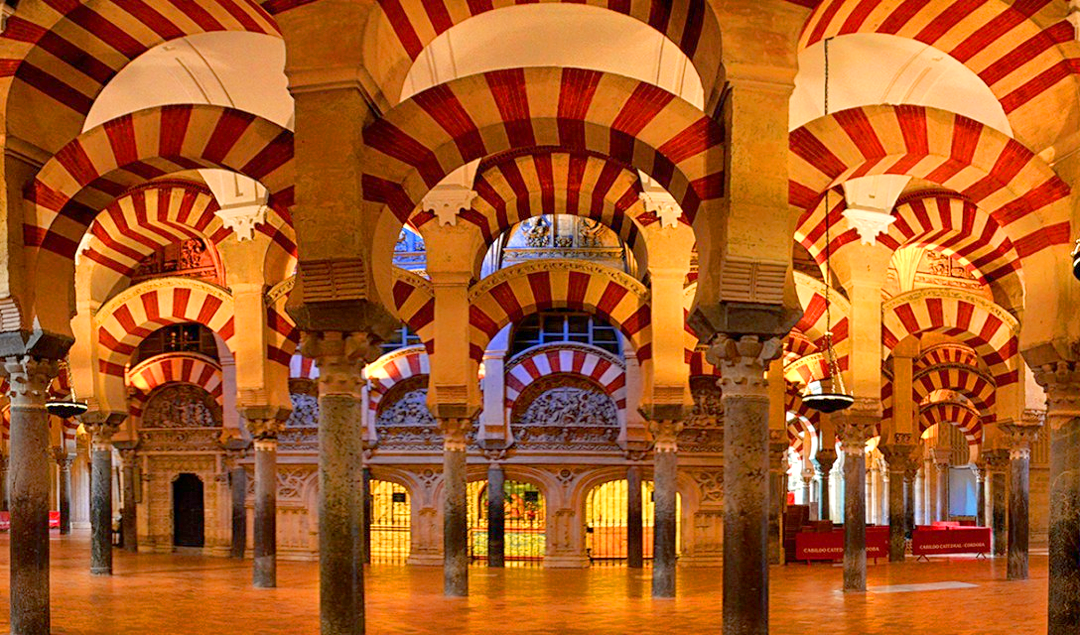 Photo: A forest of eight hundred and fifty pillars connected by Moorish arches lines the great mosque of Cordoba.

By the eleventh century, however, a small pocket of Christian resistance had begun to grow, and under Alfonso VI Christian forces retook Toledo. It was the beginning of the period the Christians called the Reconquest, and it underlined a serious problem that marred this refined, graceful, and charming era: the inability of the numerous rulers of Islamic Spain to maintain their unity. This so weakened them that when the various Christian kingdoms began to pose a serious threat, the Muslim rulers in Spain had to ask the Almoravids, a North African Berber dynasty, to come to their aid. The Almoravids came and crushed the Christian uprising, but eventually seized control themselves. In 1147, the Almoravids were in turn defeated by another coalition of Berber tribes, the Almohads.

Although such internal conflict was by no means uncommon- the Christian kingdoms also warred incessantly among themselves- it did divert Muslim strength at a time when the Christians were beginning to negotiate strong alliances, form powerful armies, and launch the campaigns that would later bring an end to Arab rule.

The Arabs did not surrender easily; al-Andalus was their land too. But, bit by bit, they had to retreat, first from northern Spain, then from central Spain. By the thirteenth century their once extensive domains were reduced to a few scattered kingdoms deep in the mountains of Andalusia - where, for some two hundred years longer, they would not only survive but flourish.

It is both odd and poignant that it was then, in the last two centuries of their rule, that the Arabs created that extravagantly lovely kingdom for which they are most famous: Granada. It seems as if, in their slow retreat to the south, they suddenly realized that they were, as Washington Irving wrote, a people without a country, and set about building a memorial: the Alhambra, the citadel above Granada that one writer has called "the glory and the wonder of the civilized world."

The Alhambra was begun in 1238 by Muhammad ibn al-Ahmar who, to buy safety for his people when King Ferdinand of Aragon laid siege to Granada, once rode to Ferdinand's tent and humbly offered to become the king's vassal in return for peace. 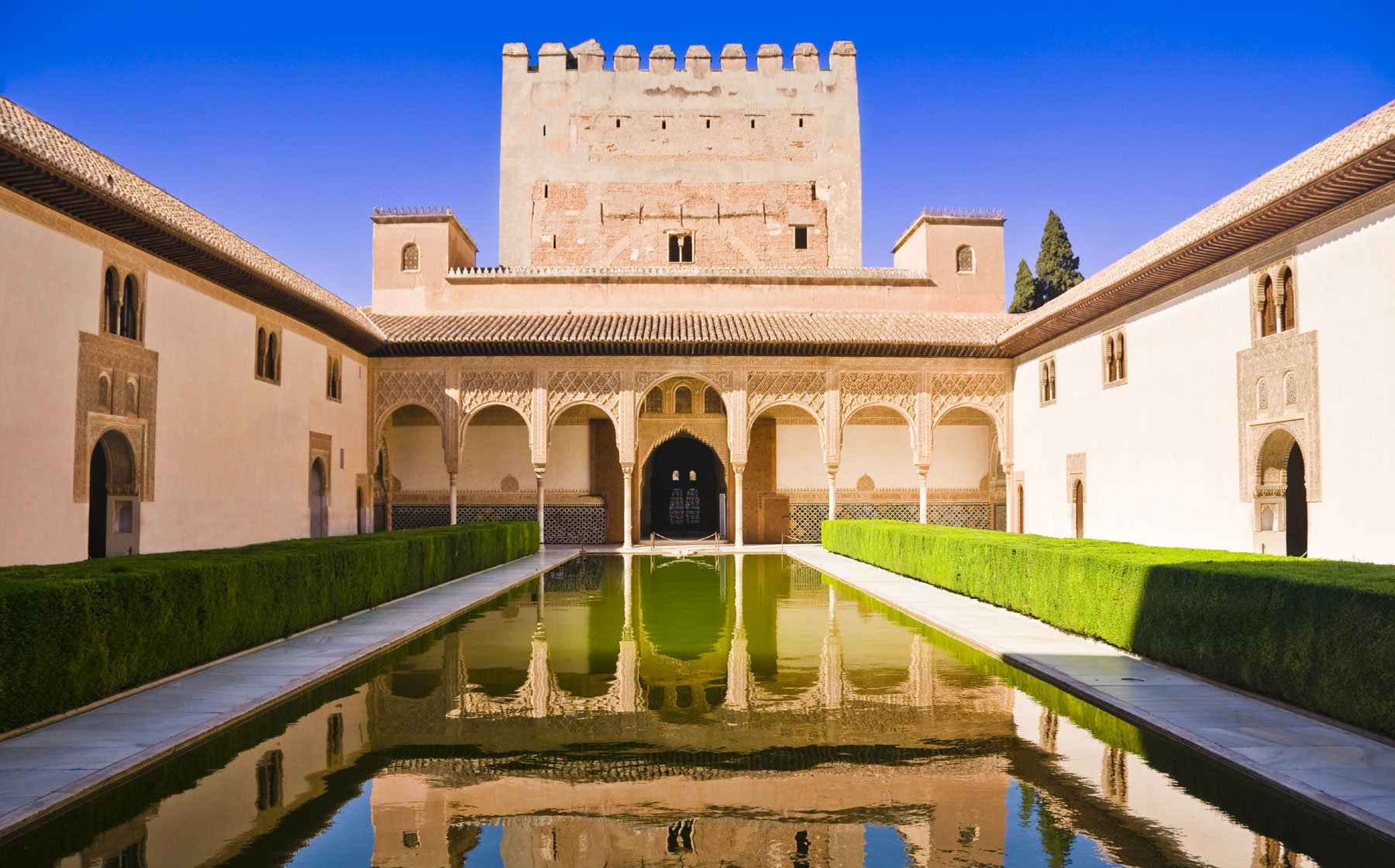 Photo: Pool in the Patio de los Arrayanes reflects the grandeur of the incomparable Alhambra.

It was a necessary move, but also difficult - particularly when Ferdinand called on him to implement the agreement by providing troops to help the Christians against Muslims in the siege of Seville in 1248. True to his pledge, Ibn al-Ahmar complied and Seville fell to the Christians. But returning to Granada, where cheering crowds hailed him as a victor, he disclosed his turmoil in that short, sad reply that he inscribed over and over on the walls of the Alhambra: "There is no victor but God."

Over the years, what started as a fortress slowly evolved under Ibn al-Ahmar's successors into a remarkable series of delicately lovely buildings, quiet courtyards, limpid pools, and hidden gardens. Later, after Ibn al-Ahmar's death, Granada itself was rebuilt and became, as one Arab visitor wrote, "as a silver vase filled with emeralds."

Meanwhile, outside Granada, the Christian kings waited. In relentless succession they had retaken Toledo, Cordoba, and Seville. Only Granada survived. Then, in 1482, in a trivial quarrel, the Muslim kingdom split into two hostile factions and, simultaneously, two strong Christian sovereigns, Ferdinand and Isabella, married and merged their kingdoms. As a result, Granada fell ten years later. On January 2, 1492 - the year they sent Columbus to America - Ferdinand and Isabella hoisted the banner of Christian Spain above the Alhambra and Boabdil, the last Muslim king, rode weeping into exile with the bitter envoi from his aged mother, "Weep like a woman for the city you would not defend like a man!" 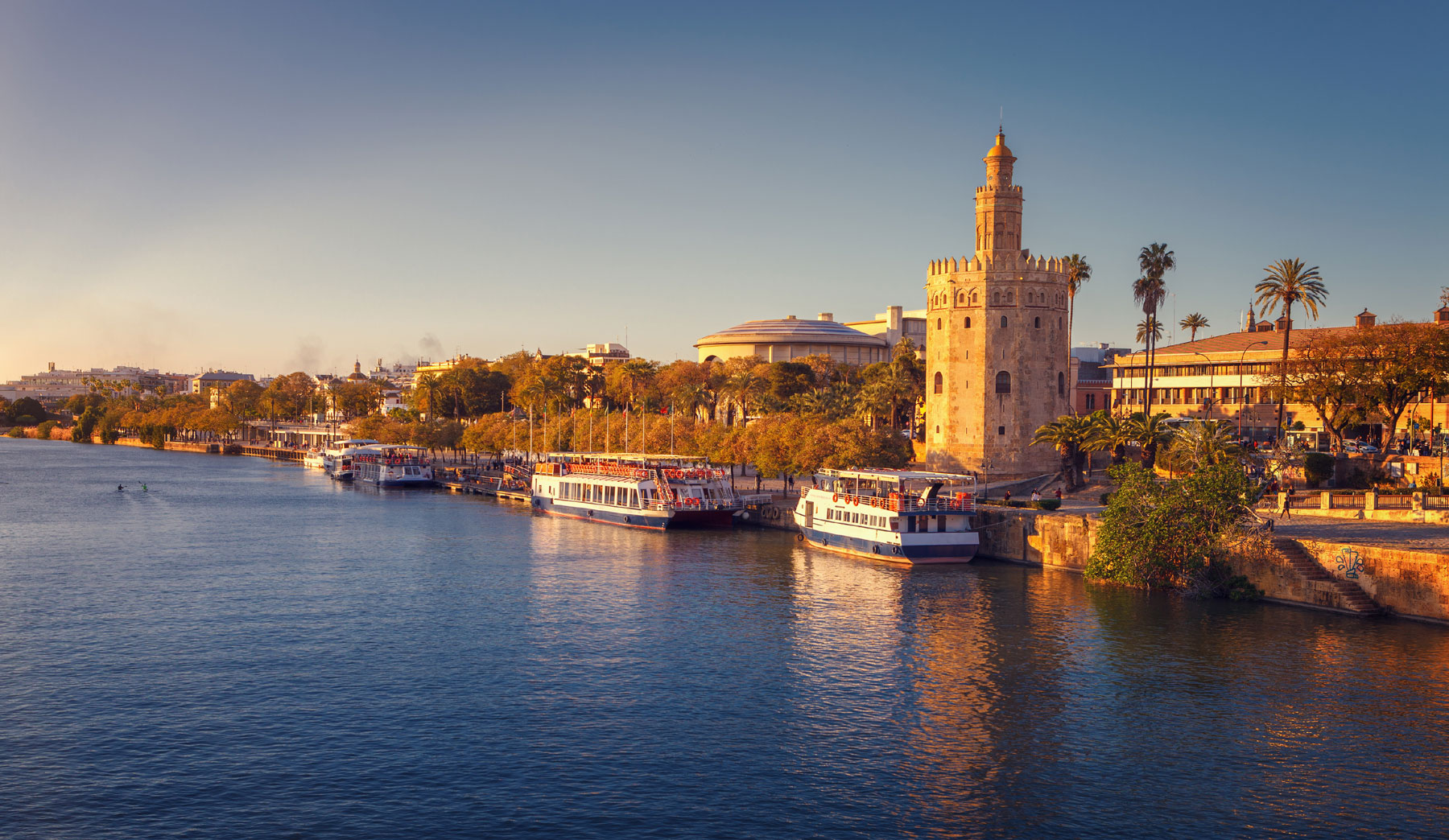 Photo: A Moorish-built tower soars above Guadalquivir River in Seville.

In describing the fate of Islam in Spain, Irving suggested that the Muslims were then swiftly and thoroughly wiped out. Never, he wrote, was the annihilation of a people more complete. In fact, by emigration to North Africa and elsewhere, many Muslims carried remnants of the Spanish era with them and were thus able to make important contributions to the material and cultural life of their adopted lands.

Much of the emigration, however, came later. At first, most Muslims simply stayed in Spain; cut off from their original roots by time and distance they quite simply had no other place to go. Until the Inquisition, furthermore, conditions in Spain were not intolerable. The Christians permitted Muslims to work, serve in the army, own land, and even practice their religion - all concessions to the importance of Muslims in Spain's still prosperous economy. But then, in the period of the Inquisition, all the rights of the Muslims were withdrawn, their lives became difficult, and more began to emigrate. Finally, in the early seventeenth century, most of the survivors were forcibly expelled.

Last Muslim King in Spain: 'These are the Keys of this Paradise'

Science and Scholarship in Al-Andalus

Did Islam Spread by the Sword?

The Story of the Final Days of Islamic Spain

A Beginner's Guide To Andalusi Calligraphy

Alhambra Palace and the River of Paradise

Islam and Islamic History and The Middle East

Lessons from the Golden Era of Andalusia

Ibn Khaldun: His Life and Works
COMMENTS DISCLAIMER & RULES OF ENGAGEMENT
The opinions expressed herein, through this post or comments, contain positions and viewpoints that are not necessarily those of IslamiCity. These are offered as a means for IslamiCity to stimulate dialogue and discussion in our continuing mission of being an educational organization. The IslamiCity site may occasionally contain copyrighted material the use of which may not always have been specifically authorized by the copyright owner. IslamiCity is making such material available in its effort to advance understanding of humanitarian, education, democracy, and social justice issues, etc. We believe this constitutes a 'fair use' of any such copyrighted material as provided for in section 107 of the US Copyright Law.

Older Comments:
AL HARAM said:
Spain is most beautiful country in World. Thanks for sharing best information about Islam.
()
﻿