Muslim Conquest of Spain - IslamiCity
Welcome to the world's oldest and most recognized Islamic Web site. Have a blessed Ramadan! Login/Sign Up

Gibraltar became part of the Visigothic Kingdom of Hispania following the collapse of the Roman Empire and came under Muslim Moorish rule in 711 AD. It was permanently settled for the first time by the Moors and was renamed Jebel Tariq – the Mount of Tariq, later corrupted into Gibraltar. The mosque at Europa Point is in the British overseas territory of Gibraltar, a peninsula connected to southern Spain (photo: iStock by Getty Images).
Category: Europe, Featured, Highlights, Life & Society Topics: Al-Andalus, History, Muslim Spain Views: 14582 14582

Few wars in Islamic history have been as decisive or as influential as the Muslim conquest of the Iberian Peninsula in the 710s. A small Muslim army arrived on the southern shores of Iberia in the year 711 and by 720, almost the entire peninsula was under Muslim control. Some people like to frame this conquest as one of imperialistic and aggressive Muslims conquering and subjecting a Christian populace with terror and force.

The truth, however, is far from that. It is a very complex conflict that cannot be easily framed in “Islam vs. Christianity” or “East vs. West” terms. The story of the Muslim invasion of Spain is one of justice, freedom, and religious toleration. Understanding the truth behind the Muslim invasion of Iberia is critical to understanding the subsequent history of religious pluralism seen throughout the history of Muslim Spain – al-Andalus.

To fully understand the conflict, we must go back hundreds of years before the birth of Prophet Muhammad ﷺ in 570. We must understand a vital split within the Christian community in the years after the Prophet Jesus (‘Isa).

While today almost all Christians believe in a concept called the Trinity, this was not always the case. The Trinity is a belief that God has three parts – the Father, the Son, and the Holy Spirit. Jesus is depicted as being the Son of God, and thus part of God himself. This belief began to emerge during the time of Paul, a missionary who introduced the idea to make Christianity more popular among the polytheistic Roman Empire in the 40s-60s AD.

This new innovation in beliefs was highly disturbing to many who followed Jesus’s true message of monotheism and devotion to God. There soon emerged two groups in the early Christian Church – those who accepted Jesus as the Son of God (the Trinitarians), and those who simply accepted him as a prophet (the Unitarians).

To the Roman government, the distinction between the two groups was not important. Both the Trinitarians and the Unitarians were oppressed in the early decades of the AD era. That all changed in the late 200s and early 300s, AD. During this time, a Unitarian preacher, Arius, began to accumulate a large following among people in North Africa. He preached the Oneness of God, and the fact that Jesus was a prophet of God, not His son. As such, he was fiercely opposed by the proponents of the Trinity, who attacked and tried to marginalize him as a crazed madman. Despite their opposition, his beliefs took hold in his native Libya, and across North Africa.

At this time, the Roman Emperor was a man by the name of Constantine. He is best remembered for his transformation of the declining Roman Empire. He moved the capital to Constantinople (modern Istanbul), and managed to defeat some of the barbarian tribes that had been attacking Rome from the north.

When Constantine moved to Constantinople (which he named after himself), he became aware of the Trinitarian Christian Church, which informed him that if he converted to Christianity, he could have all of his previous sins forgiven. Having done so, he realized he could use the Christian Church to strengthen himself politically. As such, he began to promote the Trinitarian view of Christianity, and violently oppress Unitarians, such as Arius. During this time, the Council of Nicaea was convened in 325. The purpose was to settle at last whether or not Jesus was the son of God.

Naturally, the conclusion of the Council was that Jesus was a part of God and His son, and anyone who denies this is to be excommunicated from the Christian Church. The Unitarians, who were by now a strong majority of the population in North Africa and the Iberian Peninsula, were thus officially banned and forced to practice their beliefs in hiding. Constantine even ordered that all Unitarian documents be burned and Arius himself be exiled.

The Entrance of Islam into Spain

This oppression of Unitarians continued into the 600s, when a new force, Islam, became known in the Arabian Peninsula. When Muslim armies began to appear on the edges of the Roman Empire, the Unitarians of North Africa realized they shared much in common with this new religion. Both believed in the Oneness of God. Both believed Jesus was a prophet. Both believed that the official Trinitarian stance of the Church was an innovation that should be opposed. As such, they realized Islam was simply the conclusion of the original teachings of Jesus, and most of North Africa converted to Islam within the 600s. 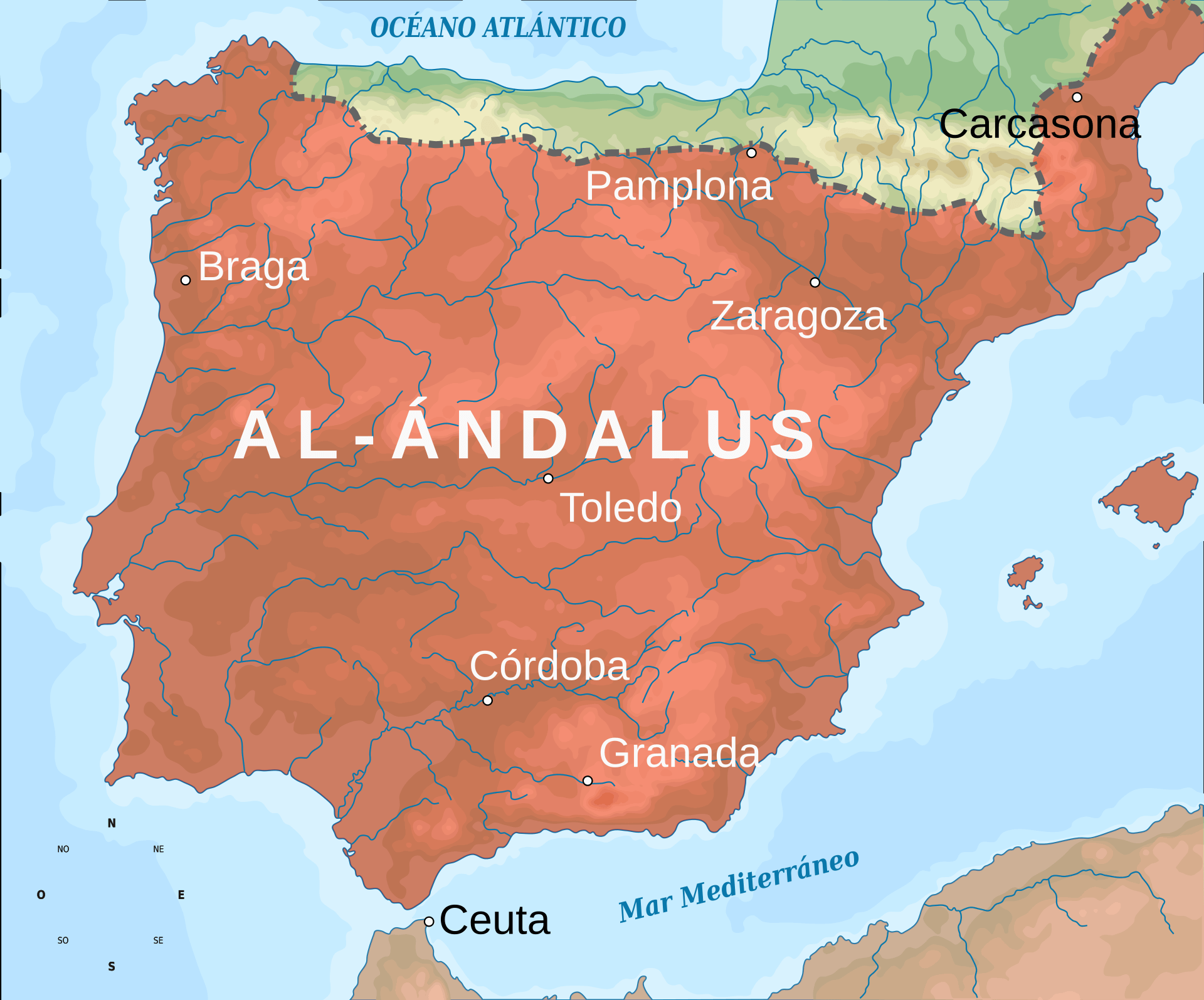 The new Muslim empire, which was run by the Umayyad Dynasty from 661-750, stretched from the Atlantic Ocean in the west to the borders of India in the east, less than 100 years after the death of Prophet Muhammad ﷺ. Stories of the justice and equity that the Muslims ruled with quickly spread beyond the Muslim borders, particularly into the Iberian Peninsula.

In the early 700s, Iberia was controlled by a Visigothic king, Roderic, who was seen as a tyrant by his people. He continued the Roman policy of the Trinity, and attempted to impose his beliefs on the populace, which was mostly Unitarian. Muslim historians, such as Ibn Khaldun, tell the legend of an Iberian nobleman based in North Africa, Julian, who went to one of the Muslim military leaders in North Africa, Tariq ibn Ziyad, and asked for help overthrowing Roderic. In addition to being an oppressive tyrant, Roderic had kidnapped and raped Julian’s daughter.

Thus, in 711, Tariq led an army of a few thousand to the southern shore of the Iberian Peninsula. After a few minor skirmishes, he met the bulk of Roderic’s army at the Battle of Guadalete on July 19, 711. The result was a decisive victory for Tariq, and the death of Roderic. With the Visigothic threat gone, the Muslim armies were able to conquer the rest of the peninsula within the next 7 years.

The story described above of how the Muslims managed to conquer Spain seems very simplistic highly unlikely. An army of a few thousand can hardly hope to conquer and entire country of 582,000 km2 in just 7 years. However, taking into account the Unitarian presence, it makes much more sense.

When the Muslims arrived in Iberia in 711, the Unitarians were very happy to help their brothers in monotheism against the oppressive Trinitarian government. For this reason, after the main battle against Roderic, most of the cities and towns of Spain opened their doors to Tariq without a fight. The Muslims offered a just legal system, freedom to practice religion, and the removal of oppressive and unjust taxes. It is no wonder that Tariq’s army was able to conquer the entire peninsula with a small army in a few years.

The Muslim conquest of Spain should not be seen as a foreign conquest and subjugation of a native population. Instead, it is an uprising of Unitarian Christians (aided by Muslims) against an oppressive Trinitarian government. The Muslim armies were specifically invited into Spain to remove oppression and establish justice, which they managed to do with the support of the locals. With such a just and moral reign, the Muslims won over hundreds of thousands of converts to Islam. Of course, the similarity in beliefs between the Muslims and Unitarians also contributed greatly the conversion of Iberia’s population to Islam. Within 200-300 years of the initial invasion, over 80% of Spain’s population was Muslim, numbering over 5 million people, most of them people originally from Spain whose ancestors had converted, not immigrants.

75,000 Miles of Travel by Ibn Battuta
COMMENTS DISCLAIMER & RULES OF ENGAGEMENT
The opinions expressed herein, through this post or comments, contain positions and viewpoints that are not necessarily those of IslamiCity. These are offered as a means for IslamiCity to stimulate dialogue and discussion in our continuing mission of being an educational organization. The IslamiCity site may occasionally contain copyrighted material the use of which may not always have been specifically authorized by the copyright owner. IslamiCity is making such material available in its effort to advance understanding of humanitarian, education, democracy, and social justice issues, etc. We believe this constitutes a 'fair use' of any such copyrighted material as provided for in section 107 of the US Copyright Law.