For those who could not make it to Hajj - IslamiCity
Welcome to the world's oldest and most recognized Islamic Web site. Have a blessed Ramadan! Login/Sign Up

The Pilgrimage to Makkah, is one of the essential elements of the Islamic faith. It is obligatory on all believers provided they have the financial capability and physical ability to endure the challenges of the pilgrimage.

According to Islamic tradition the Kaaba, a simple square cube structure in Makkah, was the first house of worship established to remind humanity of the One Supreme God. The structure was reconstructed by Prophet Abraham and his son Prophet Ishmael.

And when We made the House (at Makkah) a destination for humankind and a sanctuary, (saying): Take as your place of worship the place where Abraham stood (to pray). And We imposed a duty upon Abraham and Ishmael, (saying): Purify My house for those who go around and those who meditate therein and those who bow down and prostrate themselves (in worship). Quran 2:125

The gathering of millions of faithful in Makkah during the days of annual pilgrimage, Hajj is a fulfillment of Prophet Abram's prayer.

And, lo, Abraham prayed: "O my Sustainer! Make this a land secure, and grant its people fruitful sustenance - such of them as believe in God and the Last Day." .. Quran 2:126

The Pilgrimage to Mecca is a sign of supreme significance. It was Prophet Abraham's unconditional commitment to God that led him to leave his wife Hagar and his infant son Ishmael in this desolated desert. Prophet Abraham was reward for his unwavering submission to God, by a promise from Him to make this uninviting land into a place of promise and plenty.

Like any other article of faith, the pilgrimage can become meaningless if it is regarded as an end in itself rather than a means for the attainment of a meaningful life.

The following story reminds us of the spirit of Hajj. 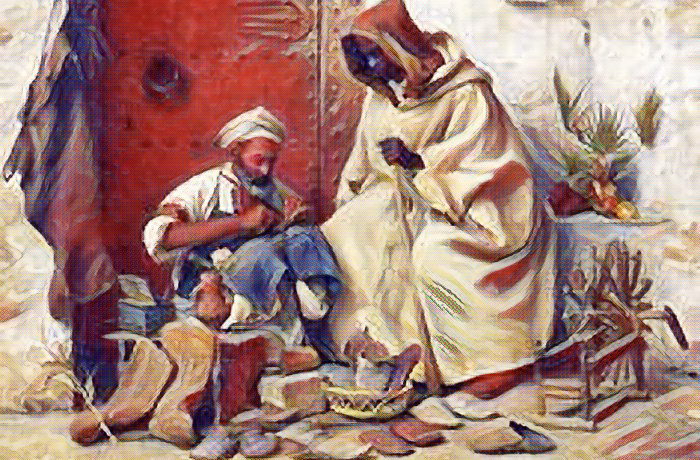 It is related that a noted Muslim scholar Abdullah bin Mubarak, had a dream while he was sleeping near the Kaaba.

Abdullah bin Mubarak saw two angels' descend from the sky, and start talking to each other.

One of the angels asked the other: "Do you know how many people have come for Hajj this year?"

The other angel replied: "Six hundred thousand have come for Hajj."

Abdullah bin Mubarak had also gone for Hajj that year.

The first angel asked: "How many people's Hajj has been accepted?"

The second replied: "I wonder if anyone's Hajj has been accepted at all."

Abdullah bin Mubarak was grieved to hear that. He thought, "So many people have come from all over the world, crossing so many obstacles like rivers, jungles, mountains, suffered so many hardships, and meeting so many expenses. Would their effort be wasted? Allah does not let anyone's effort go to waste".

He had thought only so far when he heard the other angel speak: "There is a cobbler in Damascus. His name is Ali bin al-Mufiq. He could not come for Hajj, but Allah

has accepted his intention of Hajj. Not only will he get the reward for Hajj, but because of him, all the Hajjis will be rewarded.

When Abdullah bin Mubarak woke up, he decided he would go to Damascus and meet that cobbler whose Hajj intentions carried such a lot of weight.

Abdullah bin Mubarak asked: "What do you do for a living?"

Ali replied: "I am a cobbler". Then Ali asked the stranger's name that had come looking for him.

When Abdullah bin Mubarak asked Ali to tell him if he had made any plans to go for Hajj. Ali replied "For thirty years I have lived in the hope of performing the Hajj. This year I had saved enough to go for Hajj, but Allah

did not will it, so I couldn't make my intention translate into action.

Abdullah bin Mubarak was eager to find out how could this man's Hajj be accepted and blessed for all the people who went for Hajj that year when he didn't go for Hajj in the first place. While talking to the cobbler he could feel a certain purity in his heart. Islam regards greatness not in wealth or in power, but in civility, in good manners and the goodness of heart.

Abdullah bin Mubarak further asked: "why could you not go on Hajj?". In order not to disclose the reason, Ali again replied "it was Allah's will".

When Abdullah bin Mubarak persisted, Ali revealed: "Once I went to see my neighbor's house. His family was just sitting down for dinner. Although I was not hungry I thought my neighbor would invite me to sit down for dinner out of courtesy but I could see that my neighbor was grieved about something and wanted to avoid inviting me for dinner.

After some hesitation the neighbor told me: "I am sorry I cannot invite you for food. We were without food for three days and I could not bear to see the pain of hunger of my children. I went out looking for food today and found a dead donkey. In my desperation I cut out some meat from the dead animal, and brought it home so that my wife could cook this meat. It is halal (lawful or permitted) for us because of our extreme condition of hunger, but I cannot offer it to you."

Ali continued: "On hearing this, my heart bled with tears. I got up and went home, collected the three thousand dinars I had saved for Hajj, and gave my neighbor the money. I too had to go hungry but that was to save money for Hajj, but I thought helping my neighbor during his difficult times was more important. Although I still desire to go for Hajj if Allah wills."

Abdullah bin Mubarak was greatly inspired by the cobbler's story and told the cobbler of his dream.

God is merciful and shows mercy to those who do likewise to his creatures. This act of compassion on the part of the cobbler was so pleasing to God that it not only earned him the reward of Hajj but was extended to all the people who came for Hajj.

Hajj is a journey that can ignite the soul to be reminded of the time it was created and takes it beyond the dimensions of this life to the time it will meet the creator.

The sincere performance of Hajj can transcend a person's day to day life into a spiritual awakening of the highest magnitude. A successful Hajj experience connects us to our creator and the greater compassion of humanity.

The Hajj ending in Eid-ul-Adha

The Spirituality of Hajj: Muzdalifah

The Soul of Hajj

Fasting on the Day of Arafah

The Spirituality of Hajj: 'Arafah

Hajj: The Greater Pilgrimage at Arafat
COMMENTS DISCLAIMER & RULES OF ENGAGEMENT
The opinions expressed herein, through this post or comments, contain positions and viewpoints that are not necessarily those of IslamiCity. These are offered as a means for IslamiCity to stimulate dialogue and discussion in our continuing mission of being an educational organization. The IslamiCity site may occasionally contain copyrighted material the use of which may not always have been specifically authorized by the copyright owner. IslamiCity is making such material available in its effort to advance understanding of humanitarian, education, democracy, and social justice issues, etc. We believe this constitutes a 'fair use' of any such copyrighted material as provided for in section 107 of the US Copyright Law.

Sadly, many people take those kind of stories as a literal truth.
()
ABDUL LANRE FROM NIGERIA said:
Alhamdulillah, the mesaage is very touching and educative. How I wish all our leaders and humanity in general will emulate this holy cobbler and the entire human race will benefits from the bounty of Almighty Allah. How much do we need in this world that we are ready to commit the worst of atrocities? May Almighty Allah help us all. Amin. Please keep the good work. May Allah reward you all abundantly. Amin.
()
AIDA ZAIDI FROM USA said:
My mother has been desperately wanting to go on Hajj for many years, has tried to save for the journey, but also has a son who needed help financially. She is now not well enough to do the Hajj, but I pray to Allah that He accepts her intention. Ameen.
()
ALI FROM USA said:
subhanallah very touching and very strong story of the Cobbler's Hajj from which we can learn so many things first he is taking care of his neighbor, feeding the hungry and being patient and always trusting in Allah's Will. This article is very good for our youths. They need these kind of touching articles which are very useful in their lives.
()