Categories of Zakat Recipients in Our Times - IslamiCity
Welcome to the world's oldest and most recognized Islamic Web site. Have a blessed Ramadan! Login/Sign Up

All of the world’s major religions contain some form of almsgiving, but Zakat has a special significance for Muslims. It is mandatory for all Muslims who are financially able to give a minimum of 2.5% of their accumulated wealth for the benefit of the poor. The word Zakat means ‘purification’ or ‘growth’.

According to a report by Global Humanitarian Assistance: Indonesia, Malaysia, Qatar, Saudi Arabia and Yemen, which is about 17% of the world’s estimated Muslim population, indicates that in these countries alone at least US$5.7 billion is currently collected in Zakat each year.

Let's look at the Quranic verse that regulates Zakat. Sura Tawba (6) in aya 60 identifies the categories of recipients of Zakat.


[i] the poor and
[ii] the needy, and
[iii] those who are in charge thereof,
[iv] and those whose hearts are to be won over,
[v] and for the freeing of human beings from bondage,
[vi] and for those who are overburdened with debts,
[vii] and for every struggle in God's cause, and
[viii] for the wayfarer:

this is an ordinance from God - and God is all-knowing, wise."

The needy is defined as the one who is having difficulty in meeting his/her basic needs met properly. Basic needs include food, clothing and a place to live as well as medicine if they are needed. It may also include transportation if the needy person requires it for going to work. They may be earning over the poverty line but may not be in a position to take care of their medicine or food, transportation or clothing properly.

iii. those who are in charge thereof,

It includes people who manage zakat funds whether in masajid or in other institutions. If an Imam is involved in collecting Zakat funds, he can be qualified to receive from such collections.

iv. Those whose hearts have to be won over

It includes all those people who may not have heard about Islam or who may have a negative attitude towards Islam and Muslims. In this category are included individuals and groups involved in public relations work for Islam, Muslim groups engaged in interfaith and inter-communal work, Muslim media that is primarily devoted to promoting Islam, universities, and colleges that are teaching Islam to non-Muslims.

v. For freeing of human beings from bondage

vi. and [for] those who are overburdened with debts,

Burdened by debts include those people who may be above the poverty line and whose basic needs may also be covered but who are burdened by debt to such an extent that they may not carry out their household responsibilities properly.

vii. and [for every struggle] in God's cause,

It includes those who are out there to spread the word of God and who are standing up for social justice and equality and against oppression.

viii. [for] the wayfarer

Those who are travelers with little means or displaced people including refugees or even homeless.

The distribution is not confined to Muslims only. It is not limited to non-relatives as relatives as well as family members who are in this situation may also be the recipient. 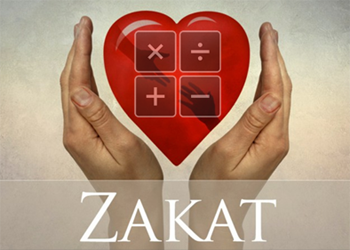 How should zakat be distributed?

It can be done individually or it can be done through organizations and Masajid who have expertise in this area.

The ideal situation would be to have a central body in every state or city to collect zakat funds in a transparent manner. The collection groups and individuals should educate the community about centralizing the resources and then through consultation with the trusted people of the community distribute to the recipients in each category.

What is important to realize is that if the zakat is distributed through agencies and masajid and institutions, then the community must be informed about its distribution. In other words, there must be absolute transparency in zakat collection and distribution.

(i) Reference: 1/4 of the world’s people already subject to large annual wealth tax to tackle poverty.

Double your Wealth with Patience

The Worst Offenders in the Eyes of Allah

Maximize the Last 10 Days of Ramadan

I’tikaaf and What It Means

The Three Stages of Ramadan

Daily Quranic Reflections: Day 26 - Juz 26
COMMENTS DISCLAIMER & RULES OF ENGAGEMENT
The opinions expressed herein, through this post or comments, contain positions and viewpoints that are not necessarily those of IslamiCity. These are offered as a means for IslamiCity to stimulate dialogue and discussion in our continuing mission of being an educational organization. The IslamiCity site may occasionally contain copyrighted material the use of which may not always have been specifically authorized by the copyright owner. IslamiCity is making such material available in its effort to advance understanding of humanitarian, education, democracy, and social justice issues, etc. We believe this constitutes a 'fair use' of any such copyrighted material as provided for in section 107 of the US Copyright Law.