Fazlur Rahman Khan: His invention made today's skyscrapers possible - IslamiCity
Welcome to the world's oldest and most recognized Islamic Web site. Have a blessed Ramadan! Login/Sign Up

In 1931, New York's Empire State Building became the tallest building in the world and a symbol of America's place on the world stage after World War II.

Few expected, however, that at 381 metres (1,250 feet) high, it would remain the world's tallest for more than four decades. After it was completed, the Great Depression hit, followed by World War II and postwar austerity.

Skyscrapers, for all their bombast, were seen as massively inefficient, and anything bigger taller than the Empire State Building was inherently dangerous: the sheer amount of steel required to keep it upright was hardly worth the investment.

That was before Fazlur Rahman Khan came along. A Bangladeshi-born engineer who moved to America, Khan's "tube" design opened the door for a new generation of skyscrapers that could be built safely and efficiently. His designs have been behind the world's tallest buildings since the World Trade Center in 1972.

On Monday April 3, Google has commemorated what would have been Khan's 88th birthday with a Doodle showing Chicago's famous John Hancock Center, one of his most famous designs.

Fazlur Rahman Khan was born in 1929 in what is now Dhaka in central Bangladesh, but was then British India. After studying Civil Engineering he won a scholarship to travel to the United States in 1952, where he studied at the University of Illinois in Chicago.

It would be a fortuitous destination, for Chicago is now known for two of Khan's famous buildings. While he was working at an architectural firm in the city, there was growing concern about where people would live amid urbanisation and a population explosion, but skyscraper designs like the Empire Trade Building, which required huge steel reinforcements to keep them stable, were seen as inefficient.

Khan's breakthrough was a new design in which a building was not held up by central supports of steel, but by the exterior frame of the building. A series of vertical tubes make up the frame, which creates a suprising rigidity that protects against high wind speeds and earthquakes. It also allows more space inside the building.

The first of Khan's designs to use the idea was the DeWitt-Chestnut building in Chicago, then Chicago's famous John Hancock Center in 1968. At the time it was the world's second tallest building after the Empire State, and was much more efficient to build, using 145kg of steel per square metre compared to the Empire State Building's 206kg. The tube structure is neatly demonstrated by the John Hancock Center's visible exterior frame.

Although it wasn't Khan's design, the tube structure was used in the World Trade Center, which broke the Empire State Building's 41-year streak as the world's tallest building when it was completed in 1972.

It remained the tallest structure in the United States until One World Trade Center in 2014, although it was renamed the Willis Tower in 2009.

Khan died in 1982 but his tube structure is still used when making skyscrapers, including those that replaced the Sears Tower as the world's biggest.

Kuala Lumpur's Petronas Towers, Taipei's Taipei 101 and Dubai's Burj Khalifa all use a version of the tube structure. 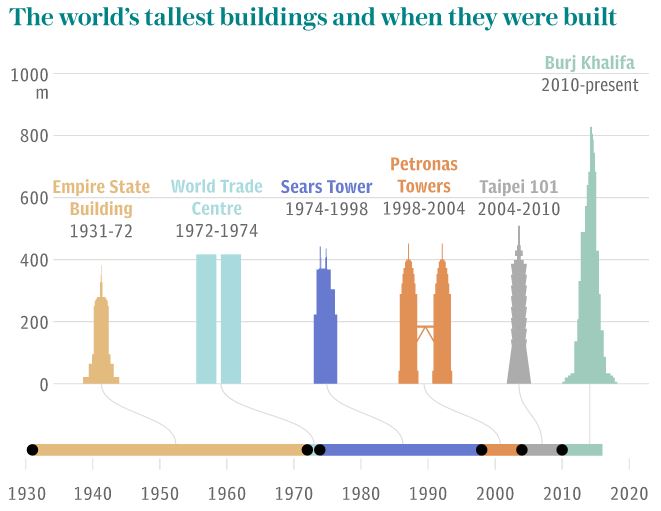 That Khan's skyscraper designs are still used today make him one of the most influential architects and engineers in history. He was also a pioneer in using computer-aided design (CAD), as well as providing humanitarian aid during Bangladesh's war of independence.

When the Burj Khalifa was completed in 2010, The Telegraph called it "the ultimate expression of his audacious, lightweight design philosophy" and said he had "changed both the economics and the morphology of supertall buildings".

He was also mentioned by Barack Obama in 2009 as an example of Muslims' contributions to America.

According to his daughter Yasmin Sabina Khan

He was inspired by the belief that his work had a positive impact and he encouraged other engineers not to lose track of the purpose of their profession. When he was named Construction’s Man of the Year, he reflected, 'The technical man must not be lost in his own technology. He must be able to appreciate life, and life is art, drama, music and, most importantly, people.'

Fazlur Rahman Khan (Bengali: ফজলুর রহমান খান, Fozlur Rôhman Khan) was a Bangladeshi-American structural engineer and architect who initiated important structural systems for skyscrapers. Considered the "father of tubular designs" for high-rises, Khan was also a pioneer in computer-aided design (CAD). He was the designer of the Sears Tower (now Willis Tower), the tallest building in the world until 1998, and the 100-story John Hancock Center.

Khan, more than any other individual, ushered in a renaissance in skyscraper construction during the second half of the 20th century. He has been called the "Einstein of structural engineering" and the "Greatest Structural Engineer of the 20th Century" for his innovative use of structural systems that remain fundamental to modern skyscraper construction. The Council on Tall Buildings and Urban Habitat established the Fazlur R. Khan lifetime achievement medal in his honor.

Although best known for skyscrapers, Khan was also an active designer of other kinds of structures, including the Hajj airport terminal, the McMath–Pierce solar telescope, and several stadium structures.

Do you Know How Many Mosques are in Ukraine?

Dec 5: MPAC 21st Annual Convention
COMMENTS DISCLAIMER & RULES OF ENGAGEMENT
The opinions expressed herein, through this post or comments, contain positions and viewpoints that are not necessarily those of IslamiCity. These are offered as a means for IslamiCity to stimulate dialogue and discussion in our continuing mission of being an educational organization. The IslamiCity site may occasionally contain copyrighted material the use of which may not always have been specifically authorized by the copyright owner. IslamiCity is making such material available in its effort to advance understanding of humanitarian, education, democracy, and social justice issues, etc. We believe this constitutes a 'fair use' of any such copyrighted material as provided for in section 107 of the US Copyright Law.