Views of Muslims in the U.S., 20 years after 9/11 - IslamiCity
Welcome to the world's oldest and most recognized Islamic Web site. Have a blessed Ramadan! Login/Sign Up

Diyanet Center of America (DCA) is based in Lanham, Maryland, serving the needs of the Muslim community in the Washington Metropolitan Area. The center benefits from its proximity to the nation's capital, various federal and state institutions, and schools. The complex consists of five main buildings, an underground parking garage, and a geothermal well field on a 15-acre site. The five buildings are a mosque constructed using 16th century classical Ottoman architecture (photo: iStock by Getty Images).
Category: Americas, Featured, Highlights, Life & Society Topics: American Muslims, Demography, Muslims In The West, United States Of America Views: 3666 3666

An unprecedented amount of public attention focused on Muslim Americans in the wake of the terrorist attacks of Sept. 11, 2001. The U.S. Muslim population has grown in the two decades since, but it is still the case that many Americans know little about Islam or Muslims, and views toward Muslims have become increasingly polarized along political lines.

There were about 2.35 million Muslim adults and children living in the United States in 2007 – accounting for 0.8% of the U.S. population – when Pew Research Center began measuring this group’s size, demographic characteristics and views. Since then, growth has been driven primarily by two factors: the continued flow of Muslim immigrants into the U.S., and Muslims’ tendency to have more children than Americans of other faiths.

In 2015, the Center projected that Muslims could number 3.85 million in the U.S. by 2020 – roughly 1.1% of the total population. However, Muslim population growth from immigration may have slowed recently due to changes in federal immigration policy. 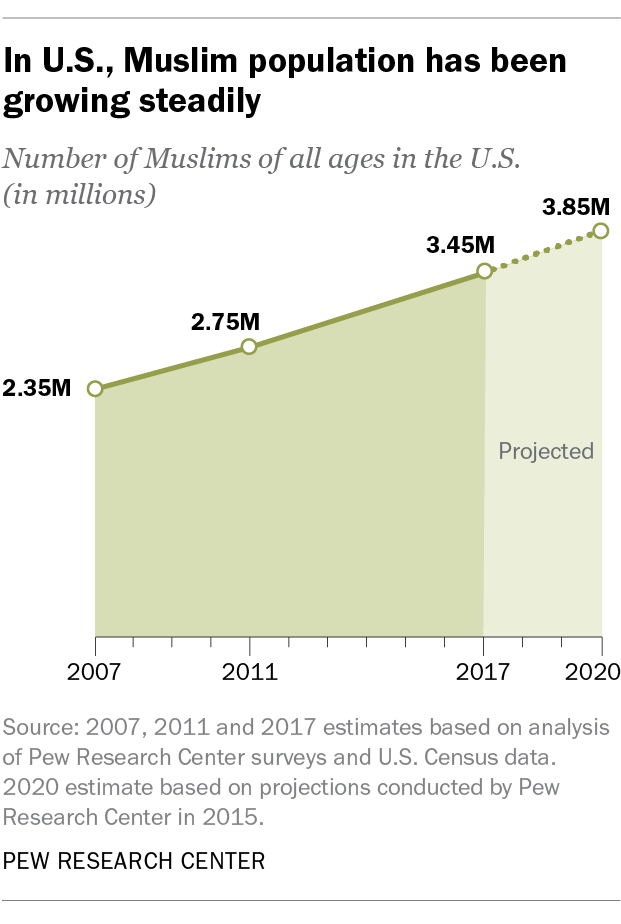 The number of Muslim houses of worship in the U.S. also has increased over the last 20 years. A study conducted in 2000 by the Cooperative Congregational Studies Partnership identified 1,209 mosques in the U.S. that year. Their follow-up study in 2011 found that the number of mosques had grown to 2,106, and the 2020 version found 2,769 mosques – more than double the number from two decades earlier.

As their numbers have increased, Muslims have also reported encountering more discrimination. In 2017, during the first few months of the Trump administration, about half of Muslim American adults (48%) said they had personally experienced some form of discrimination because of their religion in the previous year. This included a range of experiences, from people acting suspicious of them to being physically threatened or attacked. In 2011, by comparison, 43% of Muslim adults said they had at least one of these experiences, and 40% said this in 2007.

In a March 2021 survey, U.S. adults were asked how much discrimination they think a number of religious groups face in society. Americans were more likely to say they believe Muslims face “a lot” of discrimination than to say the same about the other religious groups included in the survey, including Jews and evangelical Christians. A similar pattern appeared in previous surveys going back to 2009, when Americans were more likely to say that there was a lot of discrimination against Muslims than to say the same about Jews, evangelical Christians, Mormons or atheists. 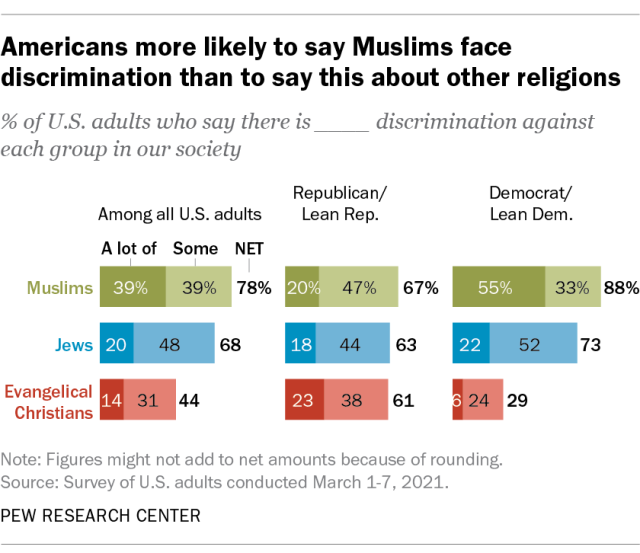 A series of Pew Research Center surveys conducted in 2014, 2017, and 2019 separately asked Americans to rate religious groups on a scale ranging from 0 to 100, with 0 representing the coldest, most negative possible view and 100 representing the warmest, most positive view. In these surveys, Muslims were consistently ranked among the coolest, along with atheists.

Though many Americans have negative views toward Muslims and Islam, 53% say they don’t personally know anyone who is Muslim, and a similar share (52%) say they know “not much” or “nothing at all” about Islam. Americans who are not Muslim and who personally know someone who is Muslim are more likely to have a positive view of Muslims, and they are less likely to believe that Islam encourages violence more than other religions.

Dr. Besheer Mohamed is a senior researcher at Pew Research Center. He is an expert on the views, demographic profile and size of U.S. Muslim communities. He also has extensive experience with computational science, as well as developing best practices for quantitative data collection on small populations. He received his doctorate in sociology and master’s degree in Middle East Studies from the University of Chicago and a Bachelor of Science degree in engineering from Cornell University.

Islam and Muslims are destined for a Great Future

Why Ms. Marvel matters so much to Muslim, South Asian fans
COMMENTS DISCLAIMER & RULES OF ENGAGEMENT
The opinions expressed herein, through this post or comments, contain positions and viewpoints that are not necessarily those of IslamiCity. These are offered as a means for IslamiCity to stimulate dialogue and discussion in our continuing mission of being an educational organization. The IslamiCity site may occasionally contain copyrighted material the use of which may not always have been specifically authorized by the copyright owner. IslamiCity is making such material available in its effort to advance understanding of humanitarian, education, democracy, and social justice issues, etc. We believe this constitutes a 'fair use' of any such copyrighted material as provided for in section 107 of the US Copyright Law.