Forgotten History: Muslim Heroes During World War I (1914-18) - IslamiCity
Welcome to the world's oldest and most recognized Islamic Web site. Have a blessed Ramadan! Login/Sign Up

The war began in 1914 Gavrilo Princip, a Bosnian Serb Yugoslav nationalist, assassinated the Austro-Hungarian heir, Archduke Franz Ferdinand, in Sarajevo. His murder catapulted a war across Europe that lasted until 1918. During the conflict, Germany, Austria-Hungary, Bulgaria, and the Ottoman Empire (the Central Powers) fought against Great Britain, France, Russia, Italy, Romania, Japan, and the United States (the Allied Powers).

World War 1 was supposed to be the war to end all wars but ended up with around 40 million military and civilians killed. Of the 60 million soldiers who fought in the war, there are millions of forgotten Muslim soldiers and laborers who traveled to Europe to fight and support the allies.

In this forgotten history is the bravery of Muslims, and the friendships they established.

Did you know that in World War 1 (1914-1918) .. that at least 4 million Muslim soldiers and laborers from all over the world, fought with the Allied forces with dignity and honor, many of whom were more decorated than their European counterparts? 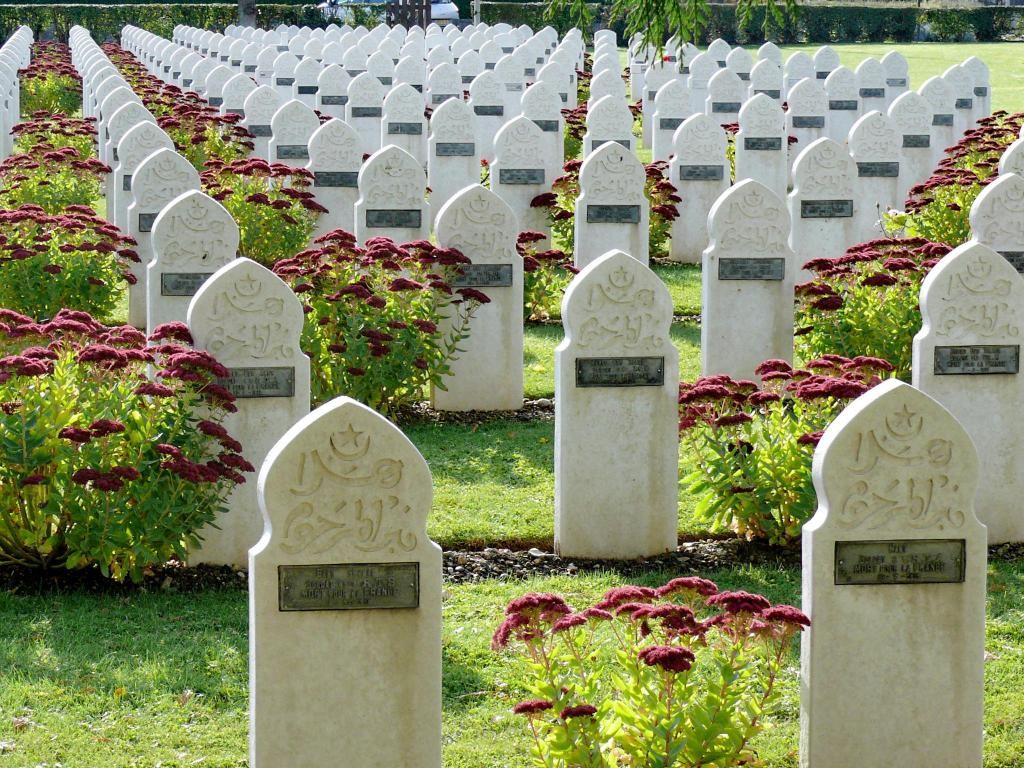 Engraved with Islamic inscriptions, the headstones of 576 Muslim soldiers stand in ranks facing Makkah at Notre Dame de Lorette, the biggest of France’s many war cemeteries.

Each one is also inscribed with the words “Mort Pour La France” – died for France – like the massed crosses of their Christian comrades in this 62-acre memorial containing the remains of over 40,000 soldiers. Today it is a lonely place of birdsong and rustling trees overlooking the slag heaps of the Artois mining region but it was once one of the bloodiest battlefields of the First World War.

The Muslim graves have lain mostly forgotten for almost a century, save on three occasions in the last decades when their graves were desecrated with anti-Muslim graffiti. The sacrifices made by these soldiers and their 4 million fellow Muslims who fought for the French Empire, the British Empire, Russia, Canada and the USA has been largely ignored, especially in comparison with the exhaustive accounts of western troops in poems, diaries and histories.

Luc Ferrier, the Belgian founder and chairman of the Forgotten Heroes 14-19 Foundation, is battling to change that.

In an interview with The National, he said he is convinced that without Muslim troops and labourers, the Allies would have lost the war. Raising public awareness of their contribution could help counter anti-Islamic sentiment in Europe, and give immigrant communities a stronger sense of belonging. 1 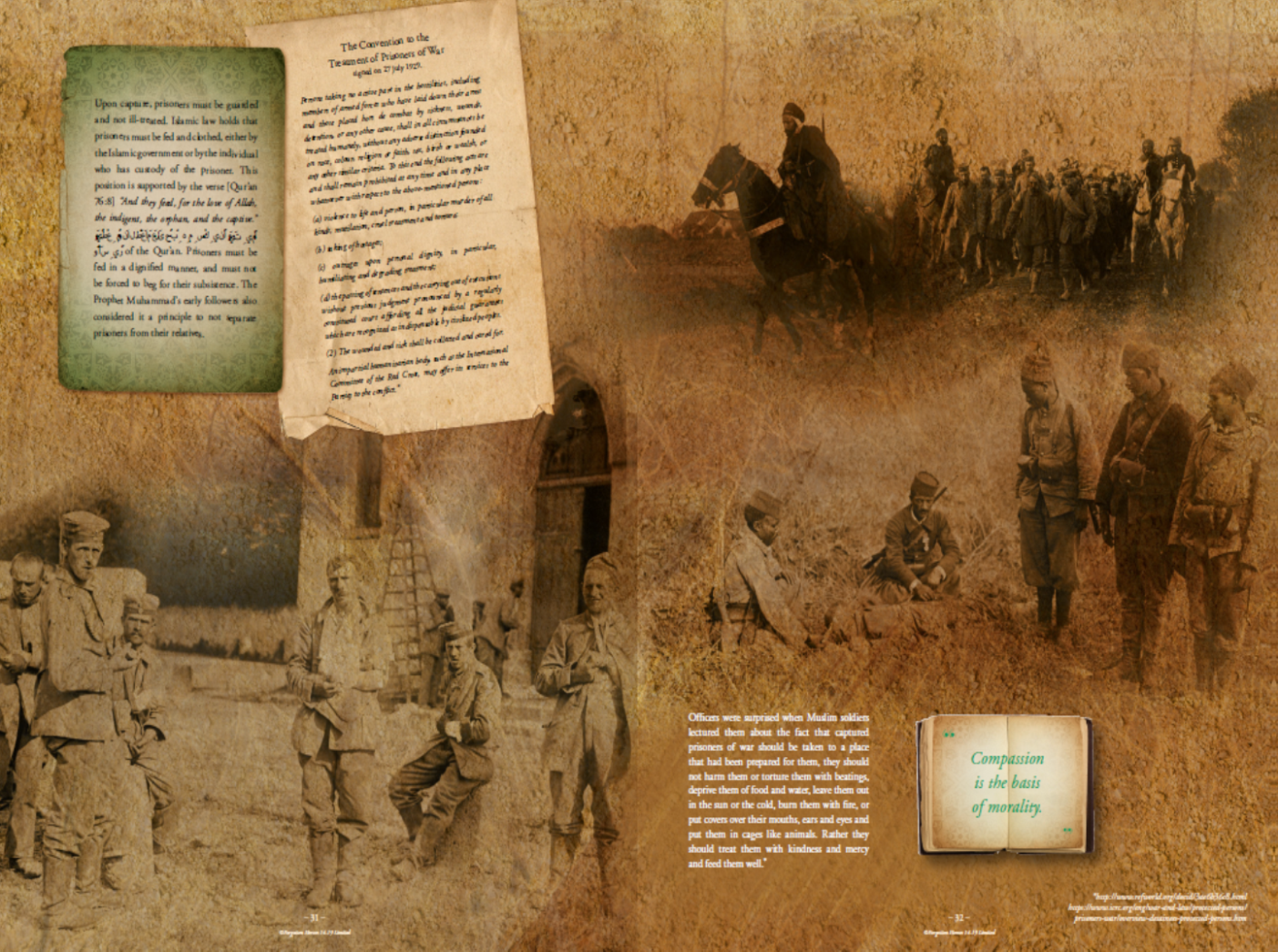 French and British officers detail how they were surprised and impressed by the way Muslim soldiers handled German POWs with respect, ensuring they were well fed and safe, even with the knowledge that their captured enemies committed atrocities by using chemical weapons. When these officers asked why they (the Muslims) behaved with this kind of courtesy towards the German prisoners, they (the Muslims) responded by referring to the Qur’an and Hadiths, saying that prisoners must be fed in a dignified manner, and must not be forced to beg for their subsistence. 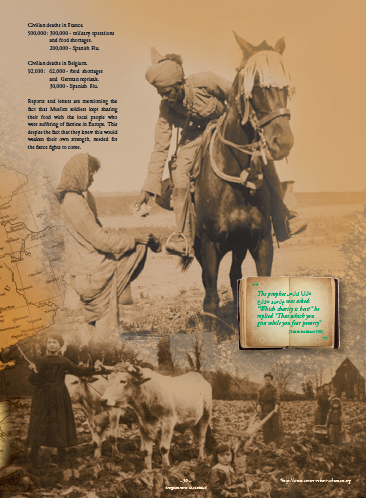 Muslim soldiers continued to share their small amount of food rations with the local people who were suffering from famine in Europe. This despite the officer's orders not to do this as it would weaken their strength, needed for the battles to come. 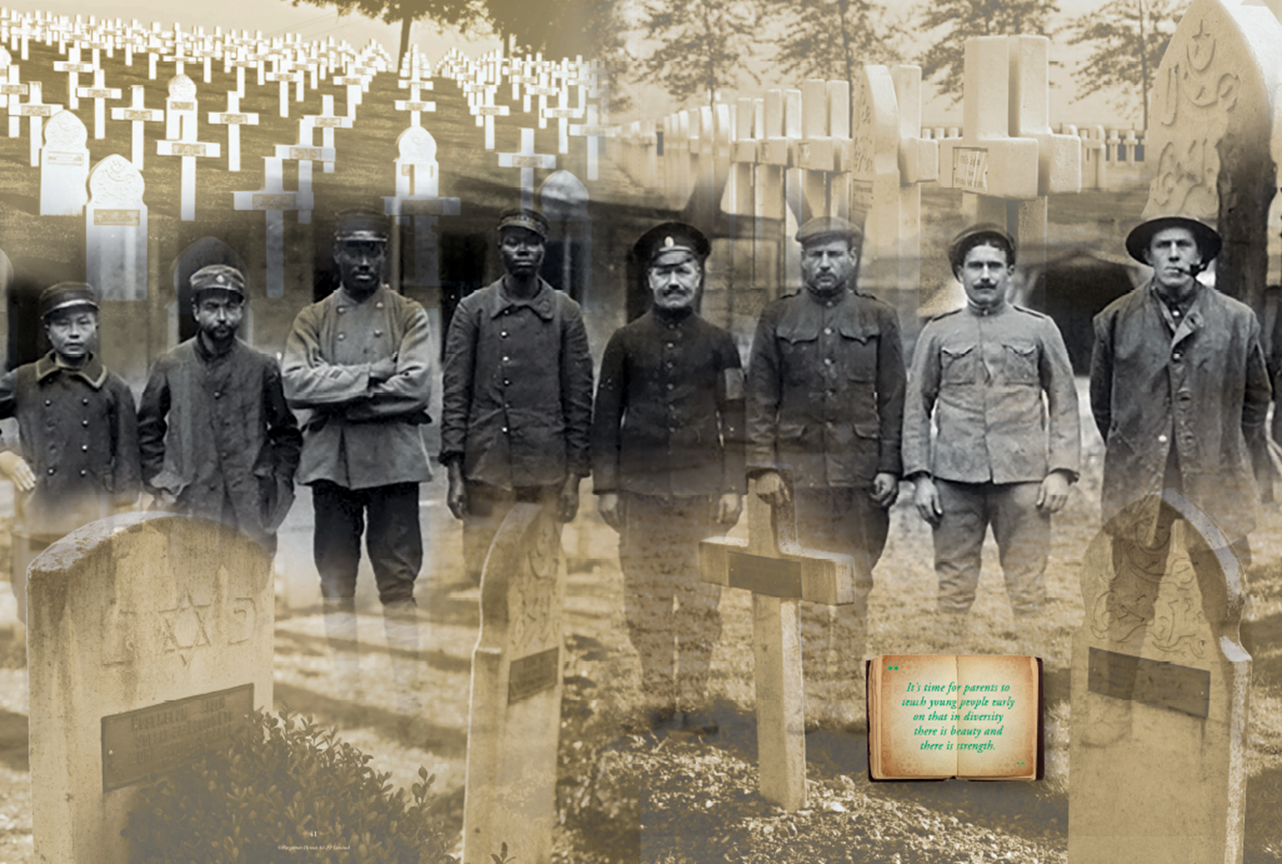 Chaplains, priests, rabbis and imams went out of their way to learn, Arabic, Hebrew, English and French, in order to accommodate religious burials of the dead on the battlefront? If soldiers then could accept and accommodate each other in this way in the trenches during wartime, what’s stopping us from doing the same today?

The little serpentine head with shiny skin seems, under the blue steel helmet, animated by a strange life. The man does not have the powerful features of so many other dark-skinned men, nor their broad stature, nor their appearance of brutal and massive strength: he is lithe, light and no doubt skillful in all the tricks of war. He has always lived under the oppressive sun of Djibouti, on the edge of the sea, which seems to roll with fire. He has lived like a lizard on a rock, seemingly motionless, but quick to defend himself, agile when danger comes. At the gates of the desert, in one of those bastions with which France stakes out its distant routes, he has always seen our colors floating against the implacable blue sky; he followed them under the greyness of our climate, under the snow and the rain. His bronzed face has contracted under the great blast of shellfire, but his warrior blood has not shivered, nor has his faithfulness to our service wavered. 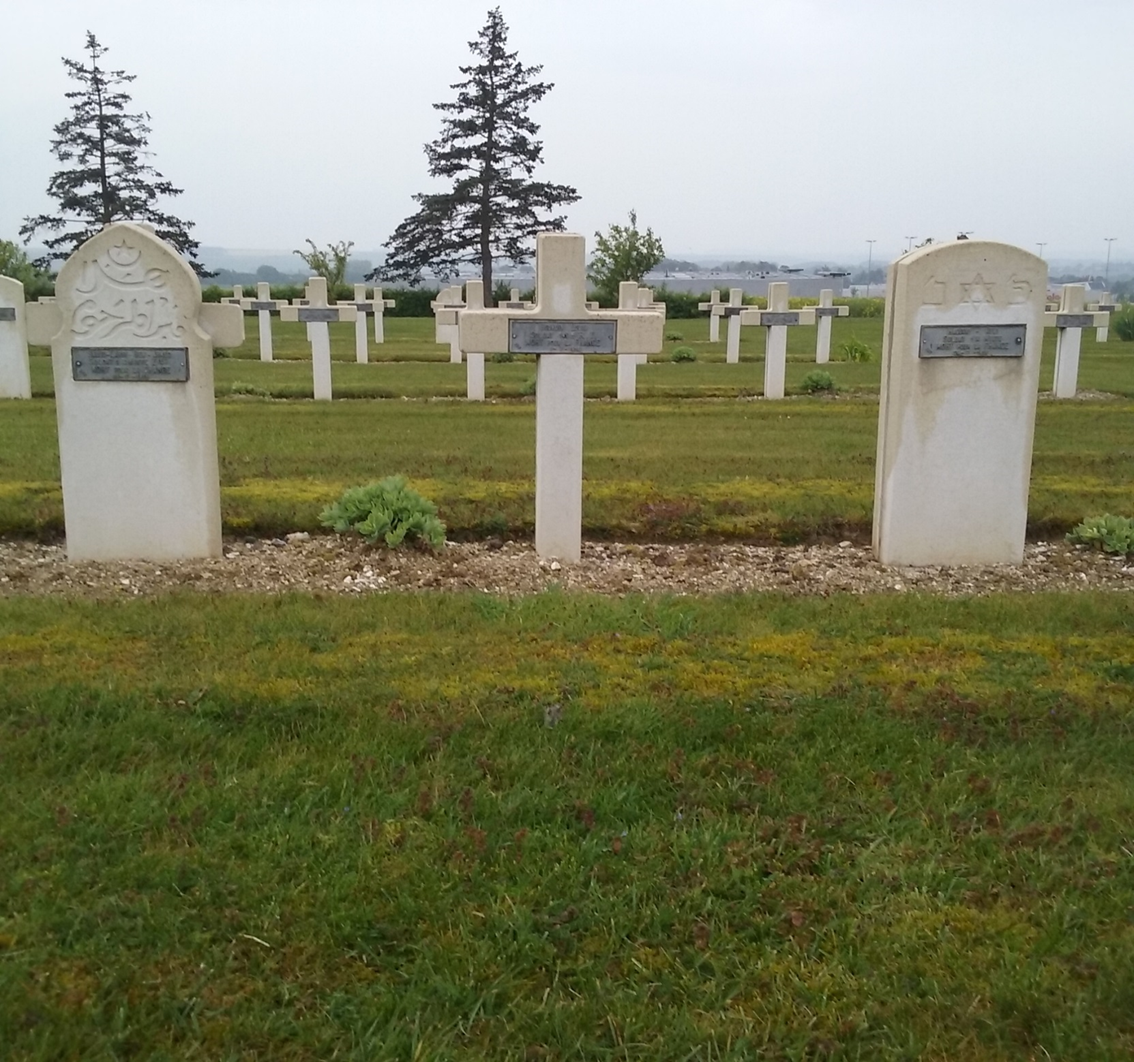 These unknown stories will foster dialogues that are truly transnational, multicultural and interfaith, between peoples of different nations, religions, languages and identities.
The aim is to find common humanity based on universal values. 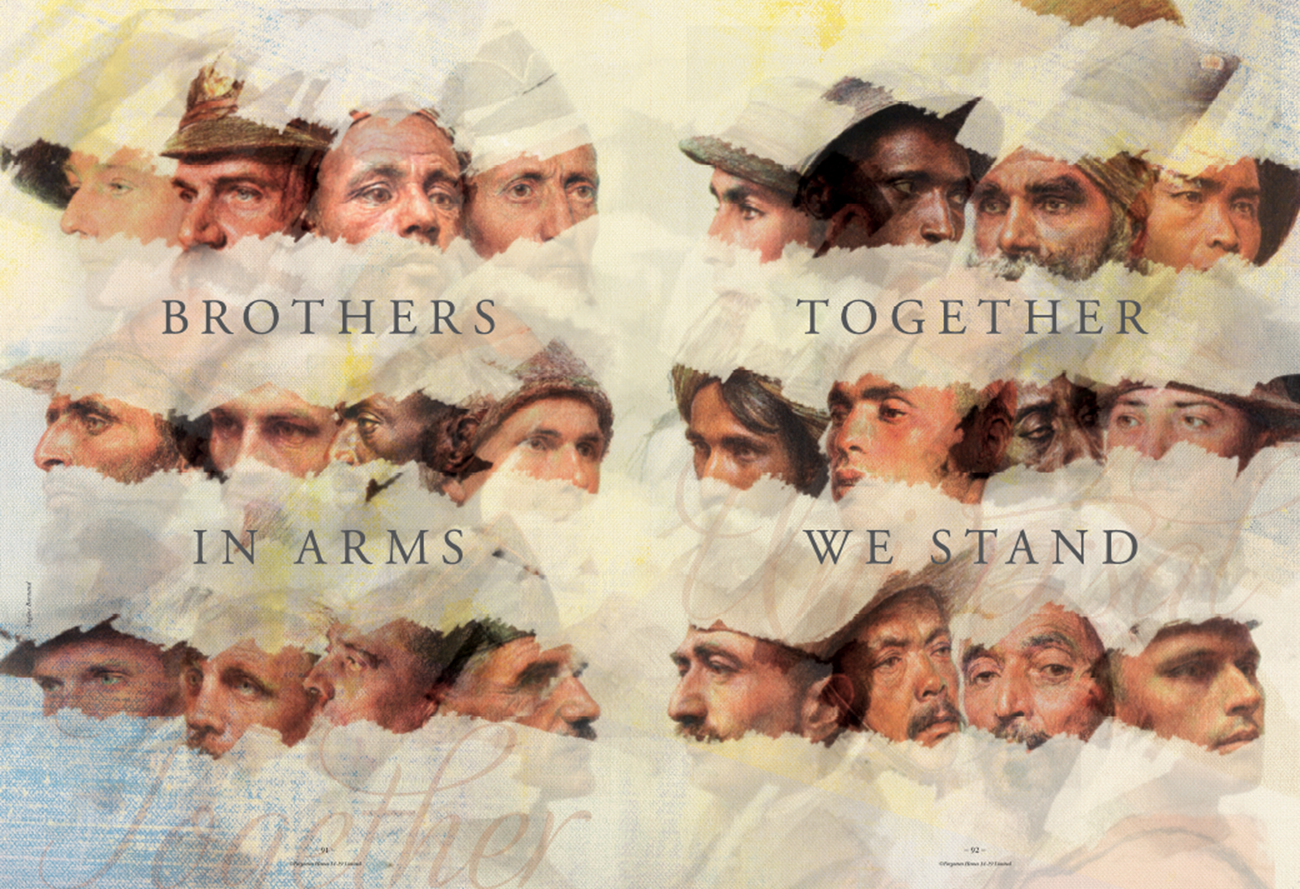 They shall grow not old, as we that are left grow old:
Age shall not weary them, nor the years contemn.
At the going down of the sun and in the morning
We will remember them.

They went with songs to the battle, they were young,
Straight of limb, true of eye, steady and aglow.
They were staunch to the end against odds uncounted;
They fell with their faces to the foe.

Buy and own this valuable treasure that brings to life the forgotten history of Muslim contribution to the First World War.

References:
1. The forgotten Muslim heroes of the First World War. The National

Who are Children of Israel (Bani Israel)?

Biruni: A Scholar of Civilization

Why All Epochal Calendars Are Religious

Milestones to Makkah and Madinah

The Muslim Father of Robotics

The Challenges of Our Time

Arabia: Arrival of the Last Prophet (Part 2 of 2)

Western Perceptions of the Prophet of Islam

When Christians First Met Muslims
COMMENTS DISCLAIMER & RULES OF ENGAGEMENT
The opinions expressed herein, through this post or comments, contain positions and viewpoints that are not necessarily those of IslamiCity. These are offered as a means for IslamiCity to stimulate dialogue and discussion in our continuing mission of being an educational organization. The IslamiCity site may occasionally contain copyrighted material the use of which may not always have been specifically authorized by the copyright owner. IslamiCity is making such material available in its effort to advance understanding of humanitarian, education, democracy, and social justice issues, etc. We believe this constitutes a 'fair use' of any such copyrighted material as provided for in section 107 of the US Copyright Law.