When we think of Islam-if we do at all-we might summon an image of Denzel Washington playing a stern and passionate Malcolm X in Spike Lee's 1992 film, or maybe we imagine Louis Farrakhan on the speaker's platform at the Million Man March in 1995. Some might have encountered Middle Eastern Muslims on the nightly news, mostly as "fundamentalists" and "terrorists." A few have met immigrant Muslims in their neighborhood. But Muslims are more diverse than popular images allow, and American Muslim history is longer than most might think, extending back to the day that the first slave ship landed on Virginia's coast in 1619. It incorporates two groups-Muslims from other countries who migrated to America by force or by choice, and African Americans who created Muslim sects in the twentieth century. Thus, a consideration of the Islamic presence in America provides a new perspective on several important (and familiar) issues that will be used to organize this essay:

Islam is a diverse and long-standing American religion-one that has had a significant presence in the United States.

There are over one billion Muslims in the world, most of whom live in Asia, not in the Middle East as most Americans presume. As in Christianity and Judaism, Islam (which is second only to Christianity in worldwide adherents) includes a number of communities or branches. The two major groups are Sunni Muslims, who constitute about 85 percent of Muslims, and Shii (or Shiite) Muslims, who account for 15 percent of the world's Islamic population. All traditional groups are represented among the five million Muslims in the United States, along with some new movements that have been cultivated on American soil.

Despite their diversity, Muslims have a good deal in common. They look to the Qu'ran- the sacred book that records the message of Allah [God] as it was revealed to his final prophet, Muhammed (A.D. ca. 570-632), and they seek to follow the example (sunna) of the prophet. All accept the Five Pillars of Islam, the basic beliefs and duties of Muslims:

Inscription on the portrait:
"Uncle Moro" (Omeroh), the African (or Arab) Prince whom Genl. Owen bought, and who lived in Wilmington N.C. for many years, and died in Bladen Co. in 1864, aged about 90 years. see other side 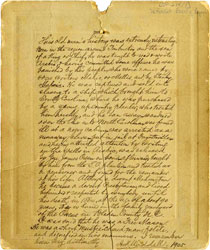 Inscription on the reverse side of the portrait:
This old man's history was extremely interesting. Born in the region around Timbuctoo and the son of a King or Chief, he was taught to read & write Arabic, & having committed some offence he was banished by his people who were named by some writers Malis, or Melles, and by Stanley, Malais. He was captured and sold into slavery to a ship which brought him to South Carolina, where he was purchased by a young upcountry planter, who treated him harshly, and he ran away, wandered over the line into North Carolina, was found ill at a negro cabin, was arrested as a runaway slave, pit in jail at Fayetteville, and having attracted attention by writing on the walls in Arabic, was released by Gen. James Owen on bond, afterward bought by him from the S. C. planter and treat as a pensioner and friend the remainder of his life. Although a devout Mahometan he became a devout Presbyterian, and lived befriended & respected by everybody until his death in 1864, at the age of about 90 years. He is buried in the family graveyard of the Owens in Bladen County N. C. It was said that he was a Free Mason. He was a short "Mustee" colored man, polite, and dignified in his manners. I remember him very distinctly. AM Waddell. 1905

From The DeRosset Papers, the Southern Historical Collection - University of North Carolina at Chapel Hill

A small but significant proportion of African slaves, some estimate 10 percent, were Muslim. An interesting story is that of Omar Ibn Said (also "Sayyid," ca. 1770-1864), who was born in Western Africa in the Muslim state of Futa Toro (on the south bank of the Senegal River in present-day Senegal). He was a Muslim scholar and trader who, for reasons historians have not uncovered, found himself captive and enslaved. After a six-week voyage, Omar arrived in Charleston, South Carolina, in about 1807. About four years later, he was sold to James Owen of North Carolina's Cape Fear region. In 1819 a white Protestant North Carolinian wrote to Francis Scott Key, the composer of The Star Spangled Banner, to request an Arabic translation of the Bible for Omar, and apparently Key sent one. Historians dispute how much the African Muslim leaned toward Christianity in his final years, but Omar's notations on the Arabic bible, which offer praise to Allah, suggest that he retained much of his Muslim identity, as did some other first-generation slaves whose names have been lost to us. (Omar's Arabic bible, which has recently been restored, is housed in the library of Davidson College in North Carolina.)

Most history courses cover the immigrants who changed America's population throughout the nineteenth century. But not all immigrants were European or Christian. Many were Chinese and Japanese migrants who practiced Buddhism and other Asian traditions. Thousands of Muslims came as well, and most of these first Islamic immigrants were Arabs from what was then Greater Syria. These Syrian, Jordanian, and Lebanese migrants were poorly educated laborers who came seeking greater economic stability. Many returned, disenchanted, to their homeland. Those who stayed suffered isolation, although some managed to establish Islamic communities, often in unlikely places. By 1920, Arab immigrants worshiped in a rented hall in Cedar Rapids, Iowa, and they built a mosque of their own fifteen years later. Lebanese-Syrian communities did the same in Ross, North Dakota, and later in Detroit, Pittsburgh, and Michigan City, Indiana. Islam had come to America's heartland.

The first wave of Muslim immigration ended in 1924, when the Asian Exclusion Act and the Johnson-Reed Immigration Act allowed only a trickle of "Asians," as Arabs were designated, to enter the nation.

African-American Islam in the Urban North

A Euro-American, Mohammed Alexander Webb (1847-1916), proclaimed himself a Muslim at the World's Columbian Exposition in Chicago in 1893, but converts have been more prominent among Americans of African descent, especially those who followed the mass migrations of southern blacks to northern cities beginning in the early decades of the twentieth century. Noble Drew Ali established a Black nationalist Islamic community, the Moorish Science Temple, in Newark, New Jersey in 1913. After his death in 1929, one of the movement's factions found itself drawn to the mysterious Wallace D. Fard, who appeared in Detroit in 1930 preaching black nationalism and Islamic faith. Fard founded the Nation of Islam there in the same year. After Fard's unexplained disappearance in 1934, Elijah Muhammed (1897-1975) took over, and he attracted disenchanted and poor African Americans from the urban north. They converted for a variety of reasons, but, for some, the poverty and racism in those cities made the Nation of Islam's message about "white devils" (and "black superiority") plausible.

Race Relations since the 1960s

Elijah Muhammed won an important convert when Malcolm Little (1925-1965) joined the faith in a prison cell. Malcolm X, the name he took to signal his lost African heritage, became a public figure during the 1960s, although he separated himself from the Nation of Islam before his death. After Elijah Muhammed's death in 1975, the movement split. One branch, under the leadership of the fifth son of Elijah Muhammed, moved closer to the beliefs and practices of Islam as it is practiced in most of the world. This group, which would later change its name to the American Muslim Mission, is the largest African-American Islamic movement. The much smaller Nation of Islam, which the American Muslim Mission and other Islamic groups condemn as racist and unorthodox, is much more familiar to most Americans. Many American Muslims would claim that the Nation of Islam, led by Louis Farrakhan, is not representative of either immigrant or convert Islam in the United States.

Muslims and the New Immigrants after 1965

Post-1965 significant demographic changes related to Muslims took place in America. Palestinian refugees arrived after the creation of Israel in 1948. More important for the history of American Islam, the McCarran-Walter Act of 1952 relaxed the quota system established in 1924, thereby allowing greater Muslim immigration. The gates opened even more widely after the 1965 revisions of the immigration law. Since then, Muslim migrants have fled oppressive regimes in Egypt, Iraq, and Syria; and South Asian Muslims, as from Pakistan, have sought economic opportunity. By the 1990s, Muslims had established more than six hundred mosques and centers across the United States.

Is America a Christian Nation?

Islam may soon be the second largest American faith after Christianity, if it is not already. Estimates vary widely, and a moderate estimate is five million American Muslims in 1997-more than Episcopalians, Quakers, and Disciples of Christ. As we reflect on Islam in America and recall the history of Muslim slaves and the early debates about the First Amendment, we might ask whether America is a Christian nation as some have proclaimed. Could we elect a Muslim president? If so, would she (while we are imagining, let's get bold!) view this land as a New Jerusalem or take her presidential oath on a Christian Bible, as has been traditional?

How is Islam Similar to Christianity and Judaism?

Islam Beyond the Five Pillars

Allah Gives Sustenance, But Does Not Distribute

The Decimal and Islamic Mathematics

Muslim Mathematicians on the Road to Makkah

The Prophet of Islam - His Biography

Islam 'Principle of Organization of Universe'

11 Reasons to Explore Islam
Disclaimer
The opinions expressed herein, through this post or comments, contain positions and viewpoints that are not necessarily those of IslamiCity. These are offered as a means for IslamiCity to stimulate dialogue and discussion in our continuing mission of being an educational organization. The IslamiCity site may occasionally contain copyrighted material the use of which may not always have been specifically authorized by the copyright owner. IslamiCity is making such material available in its effort to advance understanding of humanitarian, education, democracy, and social justice issues, etc. We believe this constitutes a 'fair use' of any such copyrighted material as provided for in section 107 of the US Copyright Law. In accordance with Title 17 U.S.C. Section 107, and such (and all) material on this site is distributed without profit to those who have expressed a prior interest in receiving the included information for research and educational purposes. For more information go to: http://www.law.cornell.edu/uscode/17/107.shtml If you wish to use any copyrighted material from this site for purposes of your own that go beyond 'fair use', you must obtain permission from the copyright owner.