COVID-19: The Sobering Statistics - IslamiCity
Welcome to the world's oldest and most recognized Islamic Web site. Have a blessed Ramadan! Login/Sign Up

As of Sunday, March 29, 2020, over 720,000 people worldwide are confirmed to have been infected by the Corona Virus (COVID-19). As I write around 4 p.m. EST (USA), more than thirty three thousand deaths have been confirmed. The latest statistics show that the USA has superseded China as the epicenter of the virus with more than 142,000 infected people.

In any biological system, if you put a living organism into an environment where it can thrive, with unlimited resources and no predators or competitors, it will always grow in the same fashion: exponentially.

In the case of the coronavirus COVID-19, exponential growth will occur in the disease rate in humans so long as:

Thus, it is believed that over the next couple of weeks the number will go up very sharply (see the graph below, where it is assumed doubling of the infected people every 1-5 days) in many countries, unless preventive measures against the spread are taken. 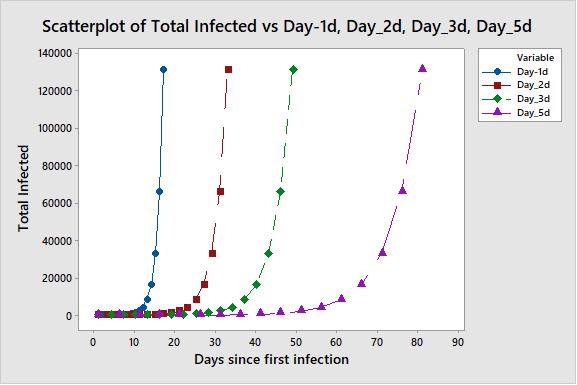 Thus far, eight countries, the USA, Italy, China, Spain, Germany, Iran, France and the UK, account for more than 80% of the infected countries. 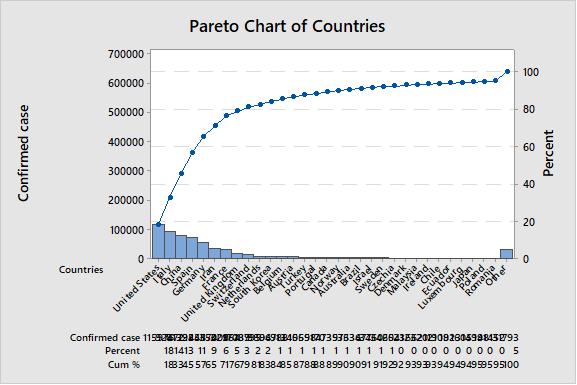 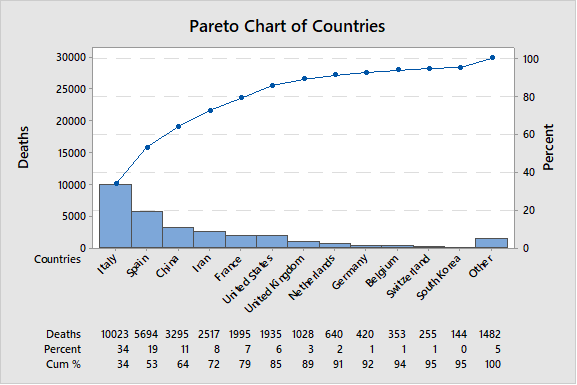 On the other hand, if statistics around the infected cases per million inhabitants are compared, the published data appear to show that people in the European countries were more vulnerable (more than 500 per million) by this pandemic than those living in the comparatively warmer territories (see the graphs and table below). 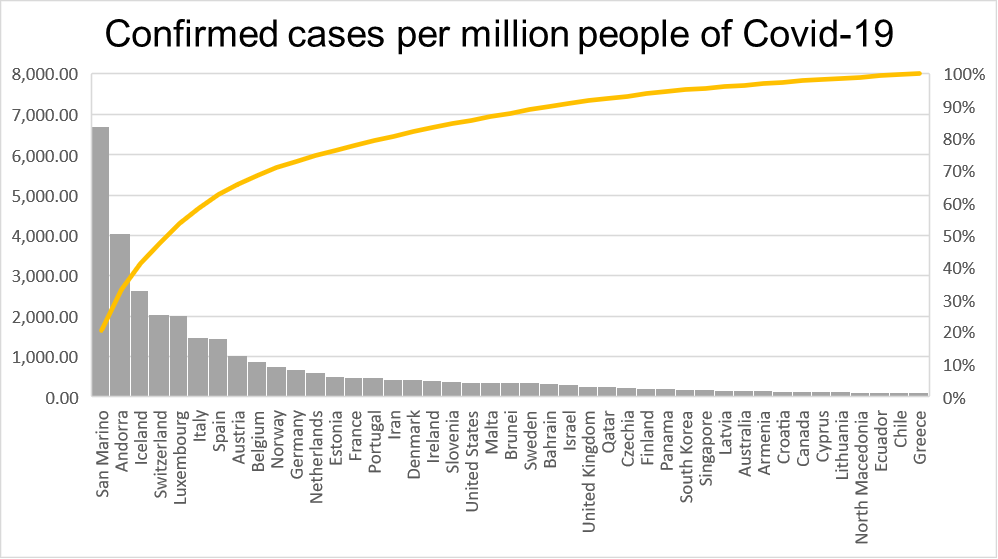 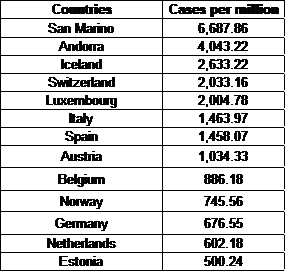 It is worth noting here that the above statistical inference is based on the assumption of the supposed authenticity of the published data that are shared by individual countries, which may not necessarily reflect the ground reality in many illiberal democracies like India and countries that are ruled by authoritarian regimes. We would, thus, probably never know how many Uighurs and Rohingyas, encamped in Xi’s and Suu Kyi’s concentration camps, respectively, got infected and died.

Many governments were either in the denial of or too nonchalant about the effect of Covid-19 while they had missed the short window of taking preventive measures. In recent weeks, while it is heartening to see that government authorities have turned to proven public health measures, such as social distancing, to physically disrupt the contagion, such measures came rather late and have contributed to exponential growth of the virus-infected people all across the world.

In affected localities, all the academic institutions are now providing on-line training. Unless required for emergency, most people are staying and working from home. These measures have severed the flow of goods and people, stalled economies, and is in the process of delivering a global recession. Truly, economic contagion is now spreading as fast as the COVID-19 itself. Millions of people have lost jobs in the last month. The Dow-Jones Index in the USA took a nose-dive, losing almost 40% of its value.

It’s clear that a vaccine would reduce the need for social distancing and thus relax the policy’s chokehold on the global economy. But no one within the scientific communities knows when that eureka moment will dawn.

In the U.S., politicians have passed a $2 trillion stimulus package to soften the blow of the coronavirus crisis. But such a package alone may not be sufficient even when the fear of the virus is gone without policy innovation that must include – amongst others – offering zero-interest loans to households and small businesses plus a moratorium on mortgage payments for residential and commercial borrowers.

No one in our lifetime has ever come across a crisis of this sort, triggered by an unknown and unseen enemy that could kill so many so fast. No one could forecast the devastating effect of this virus - sobering politicians, policy makers, and financial pundits. Perhaps the only certainty is that any attempt at a definitive forecast will fail.

Who knows this virus may teach humanity to sober up and make them God-fearing, thus, putting their collective efforts to better the lives of all, away from militarization and self-destruction!

Rajab: Reflecting on a Challenging Period

Death and Devastation: At Least 34 Tornadoes Across Eight States

Islam and the New World Order
COMMENTS DISCLAIMER & RULES OF ENGAGEMENT
The opinions expressed herein, through this post or comments, contain positions and viewpoints that are not necessarily those of IslamiCity. These are offered as a means for IslamiCity to stimulate dialogue and discussion in our continuing mission of being an educational organization. The IslamiCity site may occasionally contain copyrighted material the use of which may not always have been specifically authorized by the copyright owner. IslamiCity is making such material available in its effort to advance understanding of humanitarian, education, democracy, and social justice issues, etc. We believe this constitutes a 'fair use' of any such copyrighted material as provided for in section 107 of the US Copyright Law.