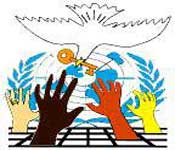 In its recently released annual report for 2002, Amnesty International concludes that "far from making the world a safer place," the U.S.-led war on terror "has made it more dangerous by curtailing human rights, undermining the rule of international law and shielding governments from scrutiny. It has deepened divisions among people of different faiths and origins, sowing the seeds for more conflicts."

In a subsequent conference, William Schultz, Amnesty's USA executive director, said that the U.S. initiated events in 2003 generated deleterious effects. That the war on Iraq provided an excuse for other countries to crack down on the opponents of their regimes "in the name of anti-terrorism or in the name of national security." That it served as a "distraction of the world's attention from horrific human rights abuses elsewhere", giving ammunition to countries that circumvent the U.N. and "use the excuse the United States itself does not respect international law."

The report reviews human rights abuses in 151 countries. In the Middle East, virtually in every country, there were "clampdowns upon freedom of expression and assembly, and intimidation of human rights defenders proliferated." And, "impunity for human rights violations continued and victims and their families were largely denied justice. The region continued to suffer from judicial and extra-judicial executions, widespread use of torture and unfair trials."

In Asia, "in the name of combating 'terrorism', governments stepped up the repression of their political opponents, detained people arbitrarily and introduced sweeping and often discriminatory laws that undermined the very foundations of international human rights and humanitarian law in several countries including Pakistan, Malaysia, Indonesia, Bangladesh, India, the Republic of Korea and Australia."

In the United States, foreign national arrested after September 11, 2001 terrorist attacks "were also deprived of safeguards under international law. They included 1,200 foreigners, mostly Muslim men who are Arab or South Asian. By the end of the year most detainees arrested during the initial sweeps had been deported - some to countries where it was feared they were at risk of being tortured - or were released on charges with crimes unrelated to 'terrorism.' " And more than 600 detainees from Afghanistan are still being held at Camp X-Ray at the U.S. naval base at Guantanamo Bay, Cuba, "without being charged and without legal assistance."

Following this report, the U.S. Department of Justice Inspector General, Glen A. Fine issued a highly critical oversight review released on June 2, 2003, that condemned the abuse of 762 foreigners held after 9/11. The Inspector General found "significant problems" in post 9/11 roundup of suspected terrorists. Many were detained on "scant evidence", and they were subjected to a "pattern of physical and verbal abuse." It reports that "without bail, terrorism suspects remained in jail for an average of nearly three months, much longer than the FBI projected, before it cleared most of them for release. In addition, the detainees faced monumental difficulties and weeks of delay before they were allowed to make phone calls and find lawyers. Some of them were kept for months in cells illuminated 24 hours a day, and were escorted in handcuffs, leg irons and waist chains."

The Inspector General's report validated the concerns raised by some members of Congress, and civil rights groups, who charge that the Justice Department has cast too wide a net in the campaign against terrorism. David Cole, a law professor at Georgetown University commented that this report "illustrates what happens when the government throws off the ordinary rules, that ensure that we don't lock up people until we have some sound reason to believe they are engaging in some illegal activity."

Ironically, a Justice Department official, responding to this overview, said that they "made no apologies" for it; and the Attorney General John Ashcroft appearing before the Congress, and asking for more new powers, used similar language.

Therefore, it is important that the public, especially in the United States, remains constantly vigilant about its rights and resists the temptation of governments to manipulate fears on the narrow focus of their security agenda. Irene Khan, the Amnesty's Secretary General concludes, "The definition of security must be broadened to encompass the security of people, as well as states. That means a commitment to human rights. That means recognizing that insecurity and violence are best tackled by effective, accountable states which uphold, not violate human rights."

Siraj Mufti, Ph.D. is a researcher and free-lance journalist.

Defense of the Persecuted

The Making of Hinducracy in Modi’s India

U.S. No Longer Has Role In Peace Process: Palestinians

The Cycle of Death Continues

The Long Arms of Hindutvadi Supremacists
Disclaimer
The opinions expressed herein, through this post or comments, contain positions and viewpoints that are not necessarily those of IslamiCity. These are offered as a means for IslamiCity to stimulate dialogue and discussion in our continuing mission of being an educational organization. The IslamiCity site may occasionally contain copyrighted material the use of which may not always have been specifically authorized by the copyright owner. IslamiCity is making such material available in its effort to advance understanding of humanitarian, education, democracy, and social justice issues, etc. We believe this constitutes a 'fair use' of any such copyrighted material as provided for in section 107 of the US Copyright Law. In accordance with Title 17 U.S.C. Section 107, and such (and all) material on this site is distributed without profit to those who have expressed a prior interest in receiving the included information for research and educational purposes. For more information go to: http://www.law.cornell.edu/uscode/17/107.shtml If you wish to use any copyrighted material from this site for purposes of your own that go beyond 'fair use', you must obtain permission from the copyright owner.