Child Abuse: Trump Executive Order Called a Sham - IslamiCity
Welcome to the world's oldest and most recognized Islamic Web site. Have a blessed Ramadan! Login/Sign Up

In the face of mounting domestic and international backlash over his administration's inhumane practice of forcibly ripping families apart at the U.S.-Mexico border, President Donald Trump on Wednesday signed an executive orderdirecting the Department of Homeland Security (DHS) to detain families together, a policy Amnesty International decried as just "another way to punish parents and children for seeking protection."

"The United States cannot continue to treat vulnerable families fleeing horrific violence and persecution like criminals. It is time to end family detention once and for all."
—Denise Bell, Amnesty International

"Make no mistake—this executive order is a betrayal of families fleeing violence and persecution," Denise Bell, refugee and migrant rights researcher at Amnesty International USA, said in a statement after Trump signed the order. "The United States cannot continue to treat vulnerable families fleeing horrific violence and persecution like criminals. We must do everything we can to ensure protection for people who have lost everything. It is time to end family detention once and for all."

While Trump insisted during remarks to reporters on Wednesday that he decided to sign the executive order—which was drafted by DHS Secretary Kirstjen Nielsen—because he has "compassion" for immigrant children, the order does absolutely nothing to reunite the thousands of families that the White House has already separated and continues the administration's so-called "zero tolerance" policy. 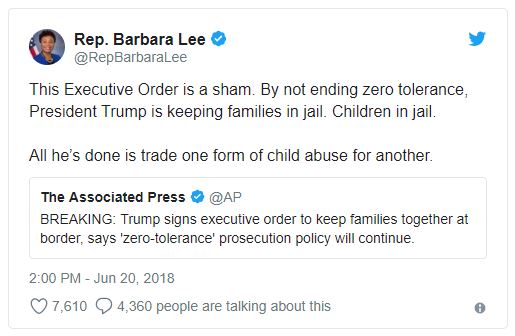 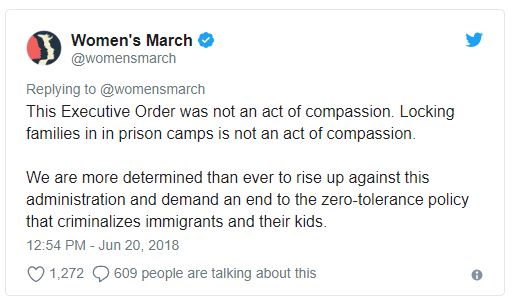 Trump's executive order comes after weeks of constant lies by White House officials and Republican lawmakers, who repeatedly claimed that the family separations adhered to the letter of the law and that "Congress alone" could remedy the humanitarian catastrophe the president and his racist team of advisersmanufactured.

As Buzzfeed explains, Trump's order instructs "DHS to keep custody over families while both criminal and administrative immigration proceedings are pending" and "directs the defense secretary to provide any existing facilities that could be used to detain families together, and to build more as needed."

"Jailing families is not an acceptable solution to putting children in cages. The best—and safest—place for these children is with their families and in their communities."
—Marielena Hincapié, National Immigration Law Center

The order also directs White House lawyers to request a modification of the 1997 Flores Settlement, which states that federal officials must"place each detained minor in the least restrictive setting appropriate" and release minors "without unnecessary delay."

As the New York Times notes, if courts don't accept this proposed modification, Trump's order is likely to spark legal challenges arguing that the "makeshift facilities" and indefinite detention of families the White House is demanding run afoul of the terms of the Flores Settlement.

In a statement on Wednesday, Marielena Hincapié, executive director of the National Immigration Law Center, argued that Trump's executive order is a substance-free attempt to "placate Americans who have been rightly outraged by their government's repugnant policies, including separating children and babies from their parents and housing them in cages."

"Jailing families is not an acceptable solution to putting children in cages. The best—and safest—place for these children is with their families and in their communities," Hincapié concluded. "The Trump administration pretends that alternatives to detention don't exist. This is false. There are numerous alternatives that are both more humane and less costly, but this president refuses to use them."

Rohingya: From Welcome to Lock-up

A Turning Point in Criticism of Israeli Human Rights Policies

Parents and Their Children

The Magnitsky Act and Bangladesh

Boycotting the Olympics is about Global Competition

Hindutvadi Chauvinism Needs to be Censured

The ‘Other’ Victims of the Liberation War of Bangladesh

The ‘Modi-fied’ Indian Democracy is a Threat
COMMENTS DISCLAIMER & RULES OF ENGAGEMENT
The opinions expressed herein, through this post or comments, contain positions and viewpoints that are not necessarily those of IslamiCity. These are offered as a means for IslamiCity to stimulate dialogue and discussion in our continuing mission of being an educational organization. The IslamiCity site may occasionally contain copyrighted material the use of which may not always have been specifically authorized by the copyright owner. IslamiCity is making such material available in its effort to advance understanding of humanitarian, education, democracy, and social justice issues, etc. We believe this constitutes a 'fair use' of any such copyrighted material as provided for in section 107 of the US Copyright Law.