1.  Allah has blessed Ramadan with Laylatul Qadr, which is the best night of the year and worship on this night is better than worshiping for a thousand months. Allah says:

2. This night marked the beginning of the revelation of the Qur’an. It was sent down from al-Lawh al-Mahfooz (the Preserved Tablet) to the first heaven on Laylat al-Qadr (the night of the Decree) all at once, then after that it was sent down in stages over twenty-three years.

It was narrated that Ibn ‘Abbas (

“Indeed, We sent the Qur’an down during the Night of Decree.” The Qur’an was sent down all at once on Laylat al-Qadr, then Allah sent it down to the Messenger of Allah (s) bit by bit. 1

If it is asked: what is the reason for the Qur’an being sent down to the first heaven all at once? The answer is to highlight its high status and the high status of the one to whom it was revealed. That was so as to announce to the inhabitants of the seven heavens that this was the last of the Books that was being sent down to the last of the Messengers and to the noblest of the nations. 2

3. The Messenger of Allaah (

“Whoever spends Laylat al-Qadr in prayer out of faith and in the hope of reward, will be forgiven his previous sins.” 3

) would strive hard in worship during the last ten nights of Ramadan as he did not do at other times. 4

)said: “When the last ten nights of Ramadan came, the Prophet (

) would refrain from marital relations, stay up at night and wake his family up.” 5

Al-Haafiz said: “Staying up at night” means staying up to do acts of worship. 6

) said: I said: “O Messenger of Allah, If I know which night is Laylat al-Qadr, what should I say?” He said:

“Say: Allaahumma innaka ‘afuwwun tuhibb al-‘afwa fa’fu ‘anni (O Allah, You are All-Forgiving and You love forgiveness so forgive me).” 8

6. Decrees for the year are decided on that night. Allah says, “On that night is made distinct every precise matter” 9

Ibn Hajar said in his commentary on Saheeh al-Bukharee:

“What this means is that the decrees for the year are decided on that night.” And al-Nawawi said: the scholars said that it is called Laylat al-Qadr because on this night the angels write down the decrees (aqdaar). 10

We must increase making du’a in the last 10 nights as du’aa can change the Divine decree and relieve distress and sorrow. Allah says,

“Allah eliminates what He wills or confirms, and with Him is the Mother of the Book.” 11

) said: “Nothing can change the Divine decree except du’aa’. 12

7. Allah appreciates the worship of his obedient servants in this night like no other night. Allah says,

“The Night of Decree is better than a thousand months.” 13

The actions are blessed and valued better than the actions done in a 1000 months.

“The lifespan for my Ummah is from sixty years to seventy [years].” 14

So Allah is giving us a lifetime full of worships and reward within one night time.

8. The scholars commented that if you have broken up with someone i.e. A relative, a Muslim friend etc. – then this is the best night to do the good/khayr of uniting with them and removing the hard feelings between each other. 15

9. “The angels and the Spirit descend therein by permission of their Lord for every matter.” 16

So on this Night, this Angel (Jibreel) – who revealed the Qur’an to Prophet Muhammad (

) – descends every year in our world with other angels. They are excited to meet Allah’s obedient slaves.

Shaykh Salman ar-Ra’I said: It is said the angels are looking forward to seeing the believers on Earth. so they seek permission of their Master (Allah) to come down on this Night, and Allah allows them to descend, after which they meet and greet the believers who are in worship during that night with Salaam (peace and greetings). 17

Ibn Katheer said: A battalion of angels come down with Jibreel and they enter every Masjid, and approach every believer who is in worship and give him Salaam. The long journey the angels and Jibreel take, just to give Salaam to the believers. What an honor. 18 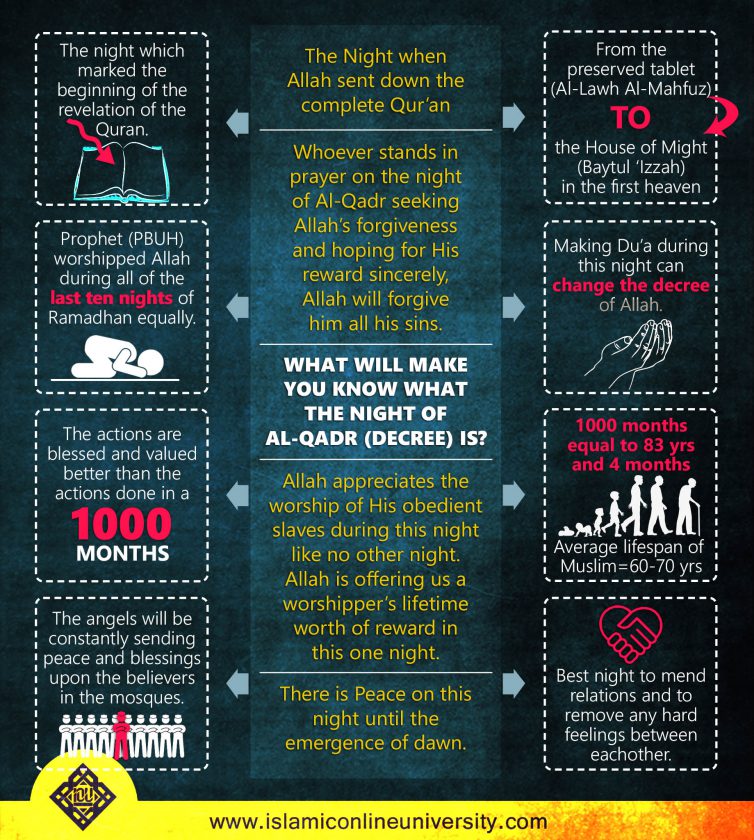 [8]. Narrated by al-Tirmidhee, who classed it as saheeh

The Powerful Night of Ramadan

Night 21: Madinah Taraweeh - Ramadan 1442/2021 - Sh Qaasim (Part 1)
COMMENTS DISCLAIMER & RULES OF ENGAGEMENT
The opinions expressed herein, through this post or comments, contain positions and viewpoints that are not necessarily those of IslamiCity. These are offered as a means for IslamiCity to stimulate dialogue and discussion in our continuing mission of being an educational organization. The IslamiCity site may occasionally contain copyrighted material the use of which may not always have been specifically authorized by the copyright owner. IslamiCity is making such material available in its effort to advance understanding of humanitarian, education, democracy, and social justice issues, etc. We believe this constitutes a 'fair use' of any such copyrighted material as provided for in section 107 of the US Copyright Law.