The Maldives is a tropical nation in the Indian Ocean composed of 26 ring-shaped atolls, which are made up of more than 1,000 coral islands.
Share on Facebook | Share on Twitter | Share on Google+
Category: Asia, Featured, Life & Society Topics: Islamic History, Maldives, Travel Views: 4778 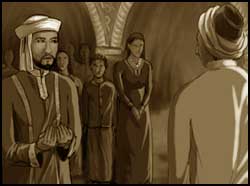 The Maldives was converted to Islam in the year 1153 AD by a Muslim from Maghreb (North Africa) by the name of Abul Barakat Yoosuf Al Barbary. When he visited the Maldives the reigning king was Sri Tribuvana Aditiya. The first King of the Theemuge dynasty King Sri Mahabarana was his maternal uncle. Sri Tribuvana Aditiya ascended the throne around 1138 AD. After conversion to Islam he adopted the name Muhammed Ibn Abdulla. He sent missionaries to various parts of the Maldives to spread Islam. The first Friday Mosque to be built in Malé and the Dharumavantha Rasgefaanu Miskiy at Malé were commissioned by Sultan Muhammed Ibn Abdulla.

Legend has it that, after arrival at Malé Abul Barakat Yoosuf Al Barbary stayed in Malé for several days. He was a Hafiz, a person who could recite the entire Holy Quran from memory. According to Thangeehu Kurevunu Dhivehi Raajjeyge Thaareekhuge Thanthankolhu (Researched excerpts from the History of the Maldives) the Hafiz succeeded in converting Maldivians to Islam after much effort and endeavour. His first efforts to proselytise did not meet with success. However his relentless perseverance turned out to be a tremendous service to the nation as Maldivians finally embraced Islam. The first convert was the king himself, who was followed by his wives and children and members of the court. After the people embraced the Islamic faith the Buddhist temples and idols were destroyed. Archaeological excavations carried out in Malé at various times this century confirm the fact that there had been Buddhist temples in Malé during the 12th century AD.

Even after Maldivians adopted Islam Abul Barakat Yoosuf Al Barbary stayed in the Maldives to teach Islam to the people. He died during the reign of Dharumavantha Rasgefaanu (Muhammed Ibn Abdulla). According to historian Hassan Thaajuddheen, he was laid to rest at the shrine at Medhuziyaaraiy in Malé.

The popular title attributed to Sultan Muhammed Ibn Abdulla, which is Dharumavantha Rasgefaanu implies that the Sultan was a pious and kind-hearted person who was generous, especially to the weak and poor. During his reign he strengthened adherence to the rules and principles of Islam, established laws of governance and destroyed the symbols of Buddhism. It is said that a long time after Abul Barakat Yoosuf Al Barbary’s death, the Sultan left on pilgrimage to Mecca and did not return.

About Maldives
The Maldives is a tropical nation in the Indian Ocean composed of 26 ring-shaped atolls, which are made up of more than 1,000 coral islands. It’s known for its beaches, blue lagoons and extensive reefs. The capital, Malé, has a busy fish market, restaurants and shops on the main road, Majeedhee Magu, and 17th-century Hukuru Miskiy (also known as Friday Mosque) made of carved white coral.  The estimated population of Maldives is 375,000.

Allah Gives Sustenance, But Does Not Distribute

The Painful Decline of the Arab Civilization

Allah’s Revelation (Wa‘hi) to His Messengers

The Al-Aqsa Mosque: Through the Ages

14 Facts About Sunni and Shia Islam

Last Muslim King in Spain: 'These are the Keys of this Paradise'
Disclaimer
The opinions expressed herein, through this post or comments, contain positions and viewpoints that are not necessarily those of IslamiCity. These are offered as a means for IslamiCity to stimulate dialogue and discussion in our continuing mission of being an educational organization. The IslamiCity site may occasionally contain copyrighted material the use of which may not always have been specifically authorized by the copyright owner. IslamiCity is making such material available in its effort to advance understanding of humanitarian, education, democracy, and social justice issues, etc. We believe this constitutes a 'fair use' of any such copyrighted material as provided for in section 107 of the US Copyright Law. In accordance with Title 17 U.S.C. Section 107, and such (and all) material on this site is distributed without profit to those who have expressed a prior interest in receiving the included information for research and educational purposes. For more information go to: http://www.law.cornell.edu/uscode/17/107.shtml If you wish to use any copyrighted material from this site for purposes of your own that go beyond 'fair use', you must obtain permission from the copyright owner.