The Miracle of Ascension - IslamiCity
Welcome to the world's oldest and most recognized Islamic Web site. Have a blessed Ramadan! Login/Sign Up

In the blessed month of Rajab, a truly miraculous event took place, known as Al-Isra' Wal-Mi'raj or The Glorious Night Journey and Miracle of Ascension.

The entire journey of Al-Isra' and Al-mi'raj was not just spiritual, but it was merely a physical journey as has been proved from the text of Holy Qur'an and from many hadiths.

"Glory be to Him Who made His servant (Prophet Muhammad) to go on a night from the Sacred Mosque (Masjid al-Haram) to the Farthest Mosque (Masjid al-Aqsa) of which We have blessed the precincts, so that We may show to him some of Our signs; surely He is the Hearing, the Seeing."

From this verse, we come to the conclusion that Rasulullah Shalallahu 'alayhi wa sallam, peace and blessing be upon him and his progeny traveled with his physical body (servant) through the worlds of Ascension. Further, by the greatness of the Hidden Power Rasulullah Shalallahu 'alayhi wa sallam was able to complete this journey in a very short span of time. 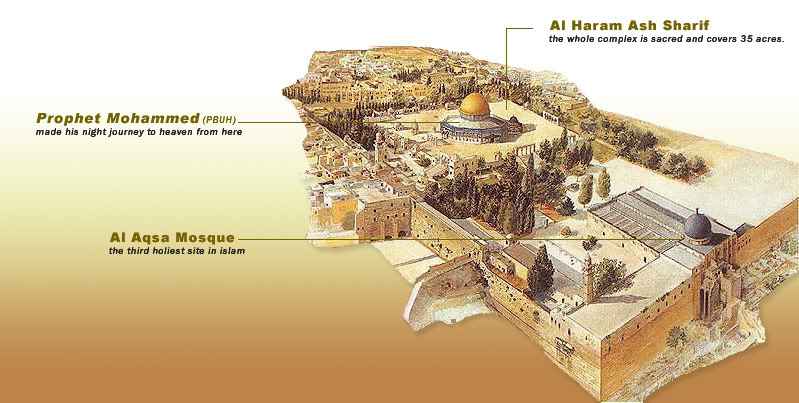 Isra' or Night Journey, a horizontal journey, which is the journey of the Prophet from the Masjid al Haraam to Masjid al Aqsa - this is the journey clearly referenced to in the Qu'ran, in the verses just quoted above.

In which Rasulullah Shalallahu 'alayhi wa sallam ascended through Allah's majesty from the Bait al Maqdis, the Dome of the Rock, through the various heavens until he reached what is known as Sidrat-ul-Muntaha, or the furthermost lote tree.

When Rasulullah Shalallahu 'alayhi wa sallam ascended to the seventh heaven, he met our Messenger, Ibrahim 'alayhi salam. Rasulullah Shalallahu 'alayhi wa sallam saw Ibrahim 'alayhi salam with his back against al-Bayt al-Ma'mur. Every day 70,000 angels go there; then exit from it, and never return. The next day another 70,000 angels go, come out, and never return. This will continue until the Day of Judgement.

The Sidra or lote tree in classical Arabic lexicology was also a metaphor for the intellect, so as we see on this journey much of what he experienced in the physical had metaphorical dimensions as the Prophet literally passed beyond -the point which human intellect can comprehend; a point exclusively reserved for him in the intimate presence or meeting with his Lord. He visited Jannah (heaven) and hell, met the Prophets, the angels (Huur ul 'ain), and meet Allah Subhanahu wa ta'ala. Sidrat al-Muntaha a very big tree of sidr. Then the Prophet ascended to what is beyond the seven skies; he entered Jannah (Paradise)..

In a reference to the Mi'raj, the Qu'ran says:

And indeed he (Muhammad) saw him [Jibrael (Gabriel)] at a second descent (i.e. another time). Near Sidrat-ul-Muntaha [lote-tree of the utmost boundary (beyond which none can pass)], Near it is the Paradise of Abode. When that which covered the lote-tree did cover it! The sight (of Prophet Muhammad) turned not aside (right or left), nor it transgressed beyond (the) limit (ordained for it).Indeed he (Muhammad) did see, of the Greatest Signs, of his Lord (Allah).

This journey, lessons that in themselves were an integral part of acquiring the readiness for it.

This Hadith clearly states "I saw My Lord".

Prophet Muhammad (s) had been granted five times prayer for His Ummah from Allah during this conversation and this has been proved by a number of Hadiths. The Five times prayer is the most significant worship that every Muslims are extremely responsible for, the first and foremost that Allah will ask about it in the Hereafter, a vital point that determines the difference between a true Muslim and others (according to a Hadith) and an extremely imperative worship that even the most unhealthy, ill-fallen and handicapped are not excused of, but are responsible to offer it five times by any means possible like Ishaarah. One of the main fundamental and salient features of this worship is that it is a direct conversation between a person and Allah (Munaajath) and therefore, it can be logically concluded that, it is awarded to the Holy Prophet for his followers in a very direct conversation (Munaajath).

Prophet Muhammad (s) had met with Allah and it makes him unique, peerless and greatest man ever lived. He had been glorified being taken to heavens, galaxies and all those super spaces that even our most advanced technology will surely fail to find a path on it.

Which means: "Allah created the Throne to show His Power and not to take it as place for Himself.

May Allah shower His blessing to the Muslim Ummah and protect them from the fitna of Dajjal.

Statement on Disruptions at Masjid al-Aqsa by Israeli Forces

Explained: The Fight for Al-Aqsa Mosque

The Qur'an - A Unique Miracle

Why Early Muslims Prayed To A Distant Masjid

Mi'raj: Reviving the Spirit of Hope
COMMENTS DISCLAIMER & RULES OF ENGAGEMENT
The opinions expressed herein, through this post or comments, contain positions and viewpoints that are not necessarily those of IslamiCity. These are offered as a means for IslamiCity to stimulate dialogue and discussion in our continuing mission of being an educational organization. The IslamiCity site may occasionally contain copyrighted material the use of which may not always have been specifically authorized by the copyright owner. IslamiCity is making such material available in its effort to advance understanding of humanitarian, education, democracy, and social justice issues, etc. We believe this constitutes a 'fair use' of any such copyrighted material as provided for in section 107 of the US Copyright Law.