What is particularly striking about the revolts in Tunisia and Egypt is the conspicuous absence of Muslim fundamentalism. In the best secular democratic tradition, the people are simply revolting against oppressive and corrupt regimes, against the needless poverty into which their countries have been plunged, and they are demanding freedom and economic hope. 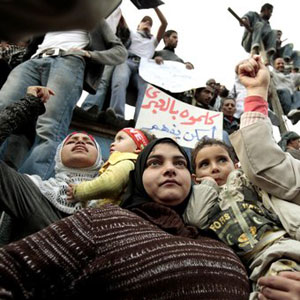 The cynical wisdom of western liberals - according to whom, in Arab countries, any genuine democratic sensibility is limited to a small bunch of liberal elites, while the vast majority can only be mobilized through religious fundamentalism or vulgar nationalism - has been proven wrong.

When a new provisional government was nominated in Tunis, it excluded Islamists and the more radical left. The reaction of smug liberals was: good, they are the basically same two totalitarian extremes - but are things really as simple as that? Is the true long-term antagonism not precisely between Islamists and the left?

Even if they are temporarily united against their common enemy, once they approach victory their unity will doubtless become unstable, and what will most likely ensure is a deadly struggle even crueler than that against the regime.

Is such a struggle not precisely what we witnessed after the 2009 elections in Iran? What the hundreds of thousands of Mousavi supporters stood for was the popular dream that sustained the Khomeini revolution: freedom and justice. Even if this dream was utopian, it did lead to a breathtaking explosion of political and social creativity, organizational experiments, and debates among students and ordinary people.

This genuine opening that unleashed the real potential for social transformation - a moment in which everything seemed possible - was then gradually stifled through the takeover of political control by the Islamist establishment.

Even in the case of clearly fundamentalist movements, one should be careful not to miss the social component. The Taliban is regularly presented as a fundamentalist Islamist group enforcing its rule with terror. However, when, in the spring of 2009, they took over the Swat valley in Pakistan, the New York Times reported that they engineered "a class revolt that exploits profound fissures between a small group of wealthy landlords and their landless tenants."

If, by "taking advantage" of the farmers' plight, the Taliban are creating, in the words of the New York Times, "alarm about the risks to Pakistan, which remains largely feudal," what prevented liberal democrats in Pakistan and the United States from similarly "taking advantage" of this plight and trying to help the landless farmers? Is it that the feudal forces in Pakistan are the natural ally of liberal democracy?

The inevitable conclusion to be drawn is that the rise of radical Islamism was always the other side of the disappearance of the secular left in Muslim countries. When Afghanistan is portrayed as a kind of archetypal Islamic fundamentalist country, does it not indicate that, a mere forty years ago, it was a country with a strong secular tradition, including a powerful communist party that took power there independently of the Soviet Union? Where did this secular tradition go?

And it is crucial that we examine the ongoing events in Tunisia and Egypt - and Yemen, and maybe, hopefully, even Saudi Arabia - against this background.

If the situation is eventually stabilized so that the old regime survives but with some liberal cosmetic surgery, this will generate an insurmountable fundamentalist backlash. In order for the crucial liberal legacy to survive, liberals need the fraternal help of the radical left.

Back to Egypt, the most shameful and dangerously opportunistic reaction was that of Tony Blair as reported on CNN: change is necessary, but it should be a stable change. Stable change in Egypt today can mean only a compromise with the Mubarak forces by means of slightly enlarging the ruling circle.

This is why to talk about peaceful transition now is an obscenity: by squashing the opposition, Mubarak himself made this impossible. After Mubarak sent the army against the protesters, the choice became clear: either a cosmetic concession in which something changes so that everything stays the same or a true break.

Here, then, is the moment of truth: one cannot claim, as in the case of Algeria a decade ago, that allowing truly free elections will effectively deliver power to Muslim fundamentalists.

Another liberal worry is that there is no organized political power to take over if Mubarak goes. Of course, there isn't: Mubarak took care of that by reducing all opposition to mere ornaments, the result being reminiscent of the title of the famous Agatha Christie novel, And Then There Were None. The argument for Mubarak - that it's either him or chaos - is thus an argument against him.

The hypocrisy of western liberals is breathtaking: they publicly support democracy, and now, when the people revolt against the tyrants on behalf of secular freedom and justice, not on behalf of religion, they are all deeply concerned. Why be concerned? Why not hope that freedom is given a chance?

Today, more than ever, Mao Zedong's old motto is pertinent: "There is great chaos under heaven - the situation is excellent."

The outcome we should all hope for is Mubarak's immediate departure from Egypt. But where should he go? The answer is also clear: to The Hague. If there is a leader who deserves to sit in the dock, it is him.

Slavoj Zizek is the International Director of the Birkbeck Institute for the Humanities, University of London, and one of the world's most influential public intellectuals. His most recent books are Living in the End Times (Verso, 2010), and, co-edited with Costas Douzinas, The Idea of Communism (Verso, 2010).

The Srebrenica Genocide (July 11): Lest We Forget

De-escalation ‘an Absolute Must’ in Israel-Palestine Conflict: UN Chief

Conquest and Colonization are not Part of Islam

How Afghanistan defeated the Soviet Union

Did Islam Spread by the Sword?

Why Islamic civilization must be re-discovered
COMMENTS DISCLAIMER & RULES OF ENGAGEMENT
The opinions expressed herein, through this post or comments, contain positions and viewpoints that are not necessarily those of IslamiCity. These are offered as a means for IslamiCity to stimulate dialogue and discussion in our continuing mission of being an educational organization. The IslamiCity site may occasionally contain copyrighted material the use of which may not always have been specifically authorized by the copyright owner. IslamiCity is making such material available in its effort to advance understanding of humanitarian, education, democracy, and social justice issues, etc. We believe this constitutes a 'fair use' of any such copyrighted material as provided for in section 107 of the US Copyright Law.

Islamic moral values should be implemented (as early as childhood), because the society nowadays are so naive to do bad things. Every leaders must think wisely what is the best for their people. In return, the people will be pleased with the policies and laws issued, and they can develop their country easily into a great nation.

Hosni Mubarak, give your people a chance to obtain certain freedoms they want.
()
﻿