The Fascinating World of Islamic Numismatics - IslamiCity
Welcome to the world's oldest and most recognized Islamic Web site. Have a blessed Ramadan! Login/Sign Up

A rare Umayyad gold Dinar fetched a whooping US $4.06 million at Morton and Eden’s Oct 24, 2019 Islamic Numismatics auction. Add Buyers premiums and this coin will end up costing the buyer a tad over five million US dollars. In April 2011 this same auction house had sold another rare Umayyad Dinar for almost six million US dollars - becoming the second most expensive coin ever sold in the world.

Islamic Numismatics is a mesmerizing world that encompasses various dynasties, spread across numerous geographical locations spanning three continents and almost 1500 years of history. People have dedicated their lives to this field. Numerous books and papers have been published on almost every type of Islamic coinage.

Numismatics is more than just a hobby. It tells historians so much about the past. The right to mint coins was one of two things that were fiercely guarded by all Muslim Monarchs – the second being the inclusion of a prayer for the monarch during Friday sermon. Islamic coins provide even more information, than coins of other cultures, as they also contain the mint name (geographical location), and the year of minting, thus providing numismatics and historians with critical information. For those unfamiliar with the Arabic language, Richard Plant’s “Arabic Coins and how to read them” will make reading Islamic coins a breeze.

Islamic coinage begun after the newly established Muslim state conquered the Sassanian empire. Umar bin Khattab, the second Khalifa asked a word or two of Islamic terminology (Bismillah) be added to the existing Sassanian coin design; thus, you see the initial Islamic coins having human portraits contained in earlier Sassanian coins. This was followed by Arabic language replacing the Pahlavi script, and the Hijri calendar replacing the Yesdigrid age. Similarly, after defeating the Byzantines, the Muslims initially started marking the existing coins Sahih or Tayyib indicating that the coins were acceptable for usage. This was followed by the removal of the horizontal bar from the cross, and addition of Islamic Terminology.

Khalifa Abd al Malik Bin Marwan was responsible for the complete redesign of the Islamic coins. The obverse of these Umayyad coins had:

There is no God except
Allah alone
He has no partner

The reverse of the Umayyad coins had:

الله احد الله
الصمد لم يلد و
لم يولد و لم يكن
له كفوا احد
Allah is the one and only God
The eternal and indivisible, who has not begotten, and
has not been begotten and never is there

an equal to Him

The margins of the coins are called ‘Bismillah,’ as it starts with Bismillah and states where the coin was minted and in what year. In Umayyad coins, the name of the Khalifa is not indicated, but, it can be deduced from the year of minting. The Byzantine emperor protested these coin reforms; however, the Khalifa dismissed the Byzantine demands.

In the centre of the obverse is the Kalima or profession of faith, while the marginal legend is /muhammad rasul Allah/ followed by Huwal Ladi Arsala Rasuluhu Bil Huda Wo deen el haqe Liyunzerahu alad deeni kullihi walo karihal mushrikoon [He is the One who sent His messenger with guidance and true religion to prevail over all other religions even if the polytheist dislike it](Qur'an 9:33)
In the centre of the reverse is the Surat al-Ikhlas (Qur'an 112:1-3), and in the marginal legend is the date.

The Abbasids made slight changes to the Umayyad formula, by adding the Khalifa’s name to the coins.

Quality coins from Islamic Spain are also in considerable demand.

Sultan Mahmud of Ghazni’s following silver dirham has the obverse in Arabic, and the reverse in Sanskrit. 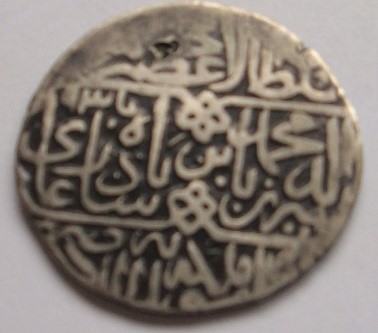 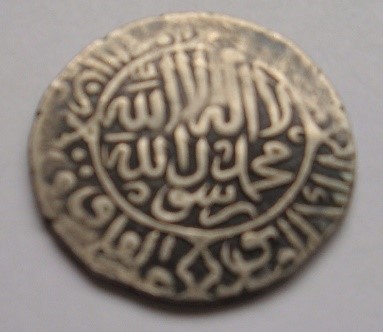 Kalima in three lines across field; all within ornate circular frame; titles in outer margin / Name and titles of Babur in three bands across field, each separated by a knotted borderline - the name and titls are given as Zahir al Ad-din Muhammad Babur Bashah Ghazi; mint formula to lower left, date (936 AH = 1529 AD). Lahore mint. 23mm, 4.65 grams. Whitehead (Punjab) 12. From the Author’s Collection.

The value of a coin depends on several factors. It’s condition – fine, very fine, extremely fine, choice, etc.; its mint – where it was minted; its Rarity or lack thereof. Above all it’s demand. For example a very ancient, rare coin, from a desirable mint may not have much demand, and hence may not fetch much. Whereas, coins that have high demand, say a Chengiz Khan’s coin, even in poor condition may fetch a decent amount. That being said, rare, precious coins are handled with extreme care, as the slightest blemish could dramatically reduce the price of an extremely valuable coin. While inexpensive, common coins are available by the bucket load, valuable coins are difficult to come by, and when they do appear on the market, collectors try to outbid each other for it. Trolling the local coin shows is a good way to get started. There are numerous large, reputable auction houses that maintain extensive databases to research coins of all cultures. There are Islamic email groups that can be of help too. Museums are good places to view rare, valuable coins.

Misbahuddin Mirza, M.S., P.E., a licensed Professional Engineer, registered in the States of New York, and New Jersey, served as the Regional Quality Control Engineer for the New York State Department of Transportation’s New York City area. He has written for major US, and Indian publications. He is an avid student of history, Islamic numismatics, and comparative religious studies.

75,000 Miles of Travel by Ibn Battuta
COMMENTS DISCLAIMER & RULES OF ENGAGEMENT
The opinions expressed herein, through this post or comments, contain positions and viewpoints that are not necessarily those of IslamiCity. These are offered as a means for IslamiCity to stimulate dialogue and discussion in our continuing mission of being an educational organization. The IslamiCity site may occasionally contain copyrighted material the use of which may not always have been specifically authorized by the copyright owner. IslamiCity is making such material available in its effort to advance understanding of humanitarian, education, democracy, and social justice issues, etc. We believe this constitutes a 'fair use' of any such copyrighted material as provided for in section 107 of the US Copyright Law.