Islam and Good Governance: A Political Philosophy of Ihsan - IslamiCity
Welcome to the world's oldest and most recognized Islamic Web site. Have a blessed Ramadan! Login/Sign Up

Fifty-three-year-old Professor Muhammad Abdul Muqtedar Khan is a well-established Muslim scholar who cites the hadith that Allah has commanded Ihsan in all things, in his new book Islam and Good Governance: A Political Philosophy of Ihsan, and asks so why not in politics?

Muqtedar Khan is most likely to influence the shape of ideas rooted in Islam in this century.  He is already creating strong waves in a Pacific Ocean stagnant for centuries. Khan is a professor in the Department of Political Science and International Relations at the University of Delaware where he established the program of Islamic Studies. Prior to joining the university, he was a scholar at the International Studies at Adrian College in Michigan, and was a non-resident Fellow at the Brookings Institute from 2003 to 2008. Khan has his Ph.D, in international relations and Islamic Political thought from Georgetown University.

He comes from the former Muslim independent state of Hyderabad that is now part of India and he is a strong advocate of change in Muslim thinking as he believes that the failure of Muslims to interact with the ever-changing world has caused Islam to be seen as a stagnant and irrelevant faith to many, including Muslims.

Khan is also an activist and he has testified at hearings in US Congress. He is also the recipient of the Sir Syed Ahmed Khan Award for service to Islam from Aligarh Muslim University Alumni.

Khan has taken a strong stand against violent extremism and equally has opposed Islamophobia. Khan considers the United States of America a beckon of hope and light and advocates democracy and freedom for Muslim societies.

His book Islam and Good Governance is a brilliant and valuable addition to Islam and politics. Khan critically examines his own faith traditions and questions many assumptions that have become part of Muslim dogma and thinking. He questioned scholars of the past and critiques Islamism for reducing Islam to an ideology. Islam, he argues, is a reservoir of values not just an identity and Muslims should focus in realizing Islamic values not just preserving identity through symbolic actions. He advocates the vision of a Muslim polity based on the concept of Ihsan or virtue of excellence as an alternative to the existing political ideals Muslim activists and groups have been promoting for long.

Such a polity in his view means that people would be free from any coercion. Laws that emanate from religious ideals would not be imposed upon people as they would be free to live their lives based on their own understanding of and responsibilities towards society. He believes that people should be inspired to develop a moral and compassionate view of humanity grounded in love and beautifying the world around them. He believes in the concept of an open society with freedom for all and commitment to social justice. He believes that Ihsan is as much a political concept as it is theological or religious and it means proper utilization of human and material resources for the well-being of all. Khan is advocating a polity that is grounded in love, sincerity, and enhancement of human potential in every sense of the term.

The book undoubtedly makes a path-breaking contribution to challenge traditional Islamic notions of good governance as shariah implementation. It argues for a new way of thinking about governance as a creation of a society where everyone can realize their moral worth, and work to perfect their own character and soul through the pursuit of social justice. It also advances traditional Islamic thought with regards to the idea of Ihsan. Khan delves into the Quran and hadith and in the fifth chapter of the book titled “Unveiling Ihsan” provides a very deep and profound rendition of the cosmology of Ihsan. This is his original contribution to Islamic theology.

In chapter six he provides a very interesting reading of the history of Islamic political philosophy focusing on its diversity and the many different ways in which Muslims have thought about Islam and governance. This is his original contribution to Islamic political thought.

This book is highly recommended for all those who are critically examining their own role in society within the context of Islam. It should be included as a textbook on Islamic governance and polity in every political department in the Muslim world and elsewhere. It is a valuable addition to political philosophy and thought. It deserves to be translated into Arabic, Urdu, Hindi, Persian, Malay, Bahasa Indonesian, French, German, and Chinese in addition to other languages of the world. It would remove the veil of ignorance for those who have been led to believe that Islam's political rule can be secured only by a system where people have no freedom or no choices. 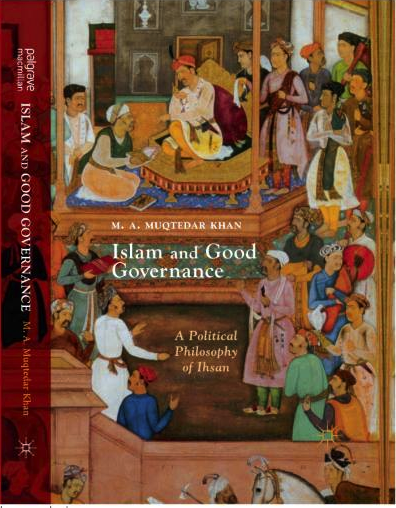 The book is available at Amazon

Taste of Times: The Time of Test

Self-Awareness: Its Impact on Nature and Humanity

The Power of the Night of Power!

Improve the Human Condition with Zakah

Quran's Message for Humanity
COMMENTS DISCLAIMER & RULES OF ENGAGEMENT
The opinions expressed herein, through this post or comments, contain positions and viewpoints that are not necessarily those of IslamiCity. These are offered as a means for IslamiCity to stimulate dialogue and discussion in our continuing mission of being an educational organization. The IslamiCity site may occasionally contain copyrighted material the use of which may not always have been specifically authorized by the copyright owner. IslamiCity is making such material available in its effort to advance understanding of humanitarian, education, democracy, and social justice issues, etc. We believe this constitutes a 'fair use' of any such copyrighted material as provided for in section 107 of the US Copyright Law.

Older Comments:
PASCHIM said:
Thank You so much for sharing this information. I found it very helpful.Thank you so much again.
()