Top 10: Christian and Muslim Populations - IslamiCity
Welcome to the world's oldest and most recognized Islamic Web site. Have a blessed Ramadan! Login/Sign Up

“Top 10” lists can often be helpful in displaying and illuminating data. For example, the two tables of countries with the largest Christian and Muslim populations featured here reveal differences in the concentration, diversity and projected changes in the world’s two largest religions. 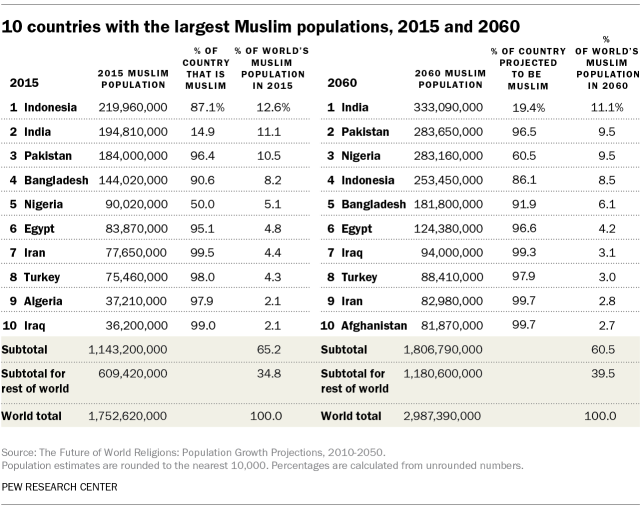 To put it another way, more than half (52%) of the world’s Christians live in countries other than those with the 10 largest Christian populations, while this is true for just over a third (35%) of the world’s Muslims. In absolute terms, there are twice as many Christians (1.2 billion) as there are Muslims (609 million) living in countries that are not on their religion’s top 10 list. 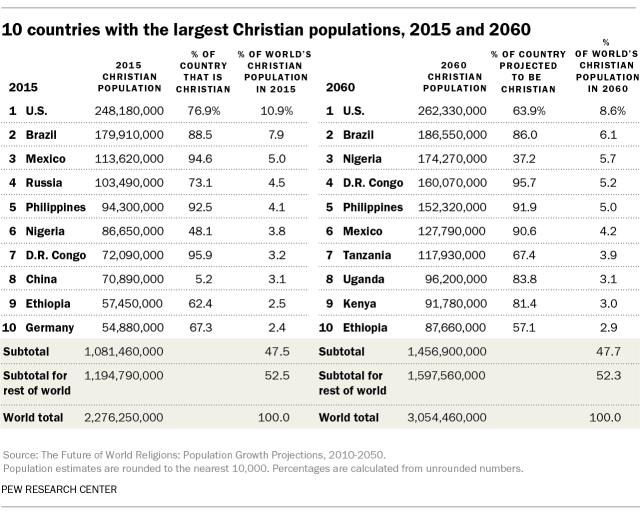 In addition, the lists illustrate the extent to which the population centers for these religions have moved away from their historical and traditional hubs. The countries with the five highest Muslim populations are all in South and Southeast Asia or in sub-Saharan Africa, rather than the Middle East; and the countries with the three highest Christian populations are in the Americas rather than in the Middle East or Europe.

The 2060 lists for Muslims and Christians are also expected to change in other ways. By 2060, India is expected to supplant Indonesia as the country with the largest Muslim population. Still, India’s Muslim population will remain a minority religious group (19%) in the Hindu-majority country.

The country with the highest Christian population, the United States, is expected to remain in that position in 2060. Lower down on the list, Tanzania, Uganda and Kenya are expected to be added, while Russia, Germany and China will fall out of the top 10.

Jeff Diamant is a senior writer/editor focusing on religion at Pew Research Center.

Muhammad: An Anticlerical Hero of the European Enlightenment

Islam and Muslims are destined for a Great Future

Jesus Through a Muslim Lens

How to Argue About Religion and Never Lose

A Forgotten Covenant
COMMENTS DISCLAIMER & RULES OF ENGAGEMENT
The opinions expressed herein, through this post or comments, contain positions and viewpoints that are not necessarily those of IslamiCity. These are offered as a means for IslamiCity to stimulate dialogue and discussion in our continuing mission of being an educational organization. The IslamiCity site may occasionally contain copyrighted material the use of which may not always have been specifically authorized by the copyright owner. IslamiCity is making such material available in its effort to advance understanding of humanitarian, education, democracy, and social justice issues, etc. We believe this constitutes a 'fair use' of any such copyrighted material as provided for in section 107 of the US Copyright Law.