U.S. Interfaith Leaders Barred From Flight to Israel - IslamiCity
Welcome to the world's oldest and most recognized Islamic Web site. Have a blessed Ramadan! Login/Sign Up

Five leaders on an interfaith delegation to Israel/Palestine were refused permission to board their plane in the United States, in what appears to be an implementation of Israel’s travel ban on supporters of Palestinian rights and Boycott, Divestment Sanctions (BDS).

Rabbi Alissa Wise: “We were told at check-in that the airline has a letter from the Israeli government saying we are not allowed to fly to Israel. I wasn’t even able to get as far as checking my bag.”

WASHINGTON DC – Five members of an interfaith delegation were prevented from boarding their flight to Israel because of their public criticism of the Israeli government’s policies towards Palestinians. The group of Jewish, Muslim and Christian leaders were apparently singled out for their public support of the Palestinian call for Boycott, Divestment and Sanctions (BDS) on the state of Israel. Upon arrival at the Lufthansa check-in counter at Dulles International Airport, an airline employee informed the group that the Israeli government had told the airline not to let them board. 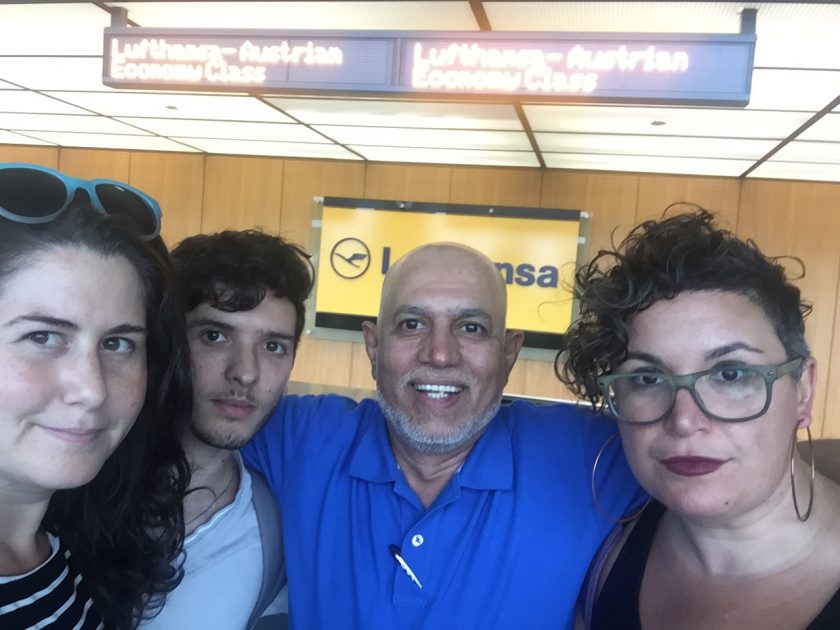 Members of an interfaith delegation to Israel were prevented from boarding a Lufthansa flight from Washington, D.C. Dulles International Airport.

“Israel denied me the ability to travel there because of my work for justice for Palestinians, even though I’m Jewish and a rabbi,” said Rabbi Alissa Wise.  “I’m heartbroken and outraged. This is yet another demonstration that democracy and tolerance in Israel only extends to those who fall in line with its increasingly repressive policies against Palestinians.”

The Israeli Knesset (parliament) passed a bill in March banning entry to those who support boycott, divestment and sanctions of Israel until Palestinians have full equal rights. Israel’s BDS ban includes those who have endorsed boycotts of products from Israeli settlements built on occupied Palestinian land in violation of international law and longstanding official U.S. policy. It is believed that this is the first time that the policy has been enforced before people even board their flight. It is also the first time that Israel has denied entry to Jews, including a rabbi, for their political positions. This new political litmus test for entry into the country is an extension of the longstanding practices of racial, religious and ethnic profiling of Palestinian, Arab and Muslim visitors to Israel.

“As a person of faith, Israel’s denial of my right to visit the Holy Land doesn’t dampen, but rather, emboldens my pursuit of justice and peace for Palestinians and long overdue freedom for Palestine,” said Shakeel Syed, a human rights activist & national Board Member, American Muslims for Palestine. “Despite that I had my boarding pass to Tel Aviv in hand, the Lufthansa representative informed me that they had a direct order from ‘Israeli immigration authorities’ to not allow us to board the plane. Furthermore, they refused to even show us the Israeli order.”

The BDS travel ban is part of a broader crackdown on support for these nonviolent tactics to hold Israel accountable to international law. The United States Congress is currently considering the draconian Israel Anti-Boycott Bill that would penalize people and companies that boycott business with Israel or Israeli settlements with penalties of up to 20 years in jail and $1 million in fines.

At a time of heightened violence in the region, when Palestinians are praying outside the Al-Aqsa compound and on the streets, protesting Israeli restrictions on worship there, a small group of faith leaders and activists have been barred from even witnessing and lending an interfaith voice for peace. Israel’s ban refuses the interfaith leaders entry to Israel and the Occupied Palestinians Territories, including the West Bank and East Jerusalem, under Israeli control.

“I am part of a Jewish, Muslim and Christian delegation of committed, nonviolent peacemakers whose plan is to meet with those in both Israel and Palestine who are working every day for a Just Peace in the Holy Lands,” Rick Ufford-Chase, Moderator of the 216th General Assembly, PC(USA) and member of the Activist Council of the Presbyterian Peace Fellowship. “At this time when tension and violence are rising once again, the work we are doing to build trust and work for a viable peace is more important than ever, and I stand ready to go the moment the State of Israel gives us permission to fly.”

The other 18 participants on the Interfaith Network for Justice in Palestine (INJIP) delegation arrived in Israel on July 24th, and were allowed to enter after several hours of detention and questioning that particularly focused on Muslim members of the delegation. The delegation plans to meet with dozens of faith-based organizations, grassroots activists and human rights groups in Israel and the Palestinian territories. Now the remaining delegates will continue this work, without five of their members, with the intention to learn, witness and co-resist Israeli occupation, displacement and siege with Palestinian and Israeli partners on the ground.

The Pilgrimage (Hajj) in Quran & Torah

India Demolishes Home of Muslim Activist
COMMENTS DISCLAIMER & RULES OF ENGAGEMENT
The opinions expressed herein, through this post or comments, contain positions and viewpoints that are not necessarily those of IslamiCity. These are offered as a means for IslamiCity to stimulate dialogue and discussion in our continuing mission of being an educational organization. The IslamiCity site may occasionally contain copyrighted material the use of which may not always have been specifically authorized by the copyright owner. IslamiCity is making such material available in its effort to advance understanding of humanitarian, education, democracy, and social justice issues, etc. We believe this constitutes a 'fair use' of any such copyrighted material as provided for in section 107 of the US Copyright Law.

Older Comments:
ONLINEQURANCOURSE said:
world considers palestinian are not humen so sad for the world
()