The Dome of the U.S. Library of Congress - Islam is portrayed as a figure standing next to an alembic with a banner reading “Physics,” representing the contributions of Islamic physical sciences.
Category: Featured, Highlights, Life & Society Topics: American Muslims, History, Islamic Culture And Civilization, Muslim Western Relations Views: 6547 6547

In the current climate of political rhetoric against Islam and Muslims, it can be hard to remember that the United States has always been a country that has respected and acknowledged the contributions of people, places and ideas from outside its borders. While we often think of its inheritance from Greece or Rome, here is a quick tour of five surprising places where Islamic history, verses, or symbols have been represented and recognized by U.S. institutions.

The tour starts just inside the entrance of the Faculty Library at Harvard Law School, where the Words of Justice exhibit presents 33 quotations representing history's greatest expressions of justice. Displayed prominently at the entrance wall are three quotations, the first by Augustine of Hippo, the second from the Magna Carta, and the third verse from the Holy Qur'an (Chapter 4, verse 135), which reads: “O ye who believe! Stand out firmly for justice, as witnesses to Allah, even as against yourselves, or your parents, or your kin, and whether it be against rich or poor: for Allah can best protect both.” The passages of the exhibit were chosen by Harvard Law faculty and students for their “testimony to the endurance of humanity's yearning for fairness and dignity through law.” 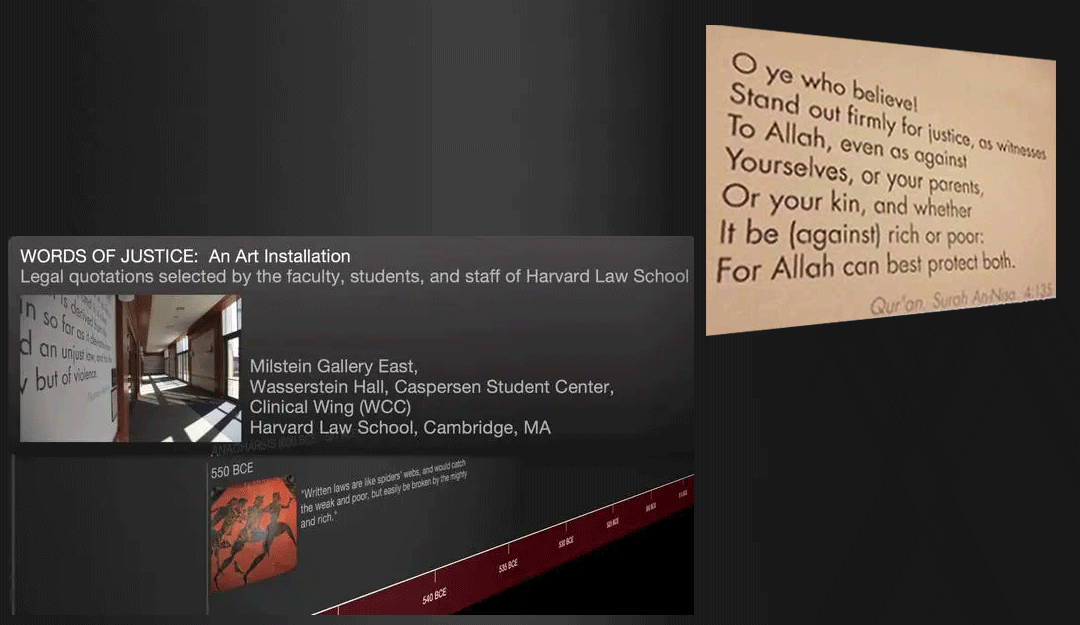 Move from the renowned school of law to the highest court. Carved in marble inside the Supreme Court building in Washington D.C., directly above the courtroom bench, on the North Wall frieze (PDF) showing eighteen of the greatest leaders in history who played a role in establishing laws. The line-up includes Justinian, Charlemagne, King John, and the Prophet Muhammad.

Although the frieze was carved in 1935, the inclusion caused a controversy in 1997. A Muslim group argued that the portrayal of the Prophet was forbidden and that the face of the sculpture should be sanded down. Chief Justice William Rehnquist responded that the sculpture was “intended only to recognize [Prophet Muhammad], among many other lawgivers, as an important figure in the history of law.” In addition, an Islamic legal scholar, Taha Jaber al-Alwani of the Fiqh Council of North America, wrote an extensive fatwa arguing that the sculpture was intended as a positive gesture and as an honor bestowed by non-Muslims. The group that raised the concern stated that they felt the issue was closed and the matter was behind them. As one article noted, the incident helped point out that not all taboos are eternal.

Walk across the street from the Supreme Court to the US Capitol building. Around the walls of the House of Representatives Chamber are twenty-three relief portrait plaques, depicting “historical figures noted for their work in establishing the principles that underlie American law.” Installed in 1950, the portraits include Moses, Grotius, Napolean, Blackstone, and Jefferson. At the North-East corner, between Maimonides and Innocent III, is a portrait of Suleiman, the Sultan of the Ottoman Empire from 1520 to 1566. Best remembered today for the architecture he sponsored, including the Suleymaniye Mosque in Istanbul and the old city walls of Jerusalem, Suleiman was known during his lifetime as the qanuni, the one who gives “canon” or laws. Among some of his laws, according to historian Lord Kinross, he issued a ferman (edict) prohibiting blood libel against Jews, and developed a reform that reduced levies paid by Christian Rayas, “raising their status above serfdom to the extent that Christian serfs would migrate to Turkish territories to benefit.” 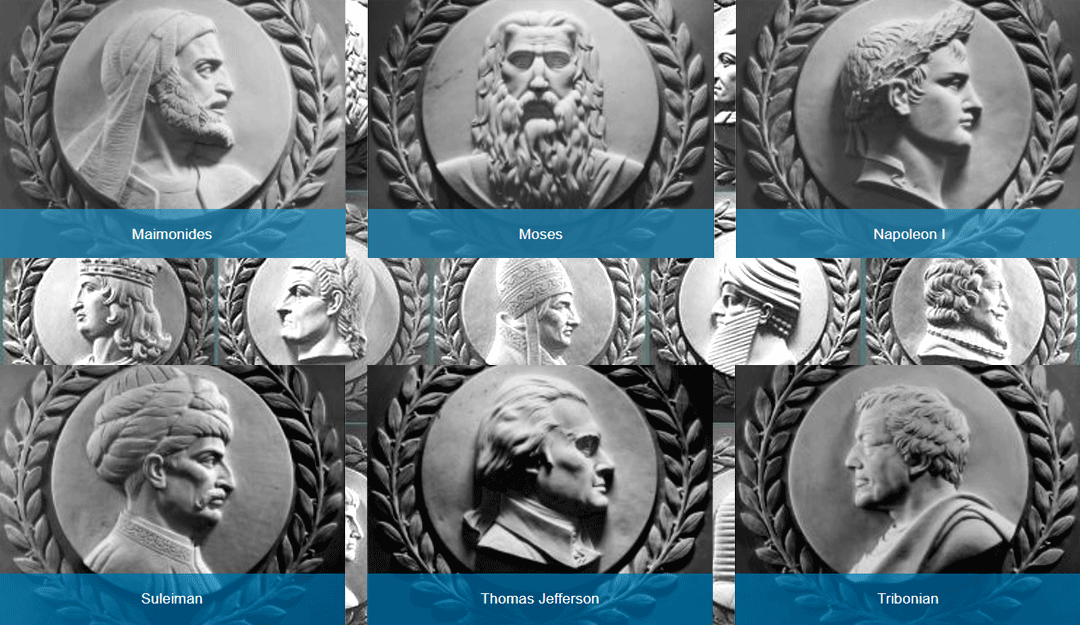 The Dome of the U.S. Library of Congress

Painted in 1897 by Edwin Blashfield, in the gigantic coffered dome above the main reading room of the Library of Congress is a mural of Human Understanding, depicted as a female flanked by two cherubs. Surrounding the mural are twelve winged figures representing epochs which were thought to have contributed to the evolution of Western civilization. The figures include Judea, Greece, Rome, Italy, Spain, England, France, and Islam. Islam is portrayed as a figure standing next to an alembic with a banner reading “Physics,” representing the contributions of Islamic physical sciences.

The impact of Islamic lands on the physical sciences is succinctly demonstrated by observing the number of scientific words that originated from or were transmitted through Arabic, many recognizable by the prefix “al”, which means “the.” The words include those used in mathematics (algebra, algorithm, average, zero, decipher, Arabic numerals), astronomy (nadir, zenith, almanac, and the majority of star names), and chemistry (alcohol, alkali, amalgam, benzene, elixir, and alchemy – the precursor word for chemistry). 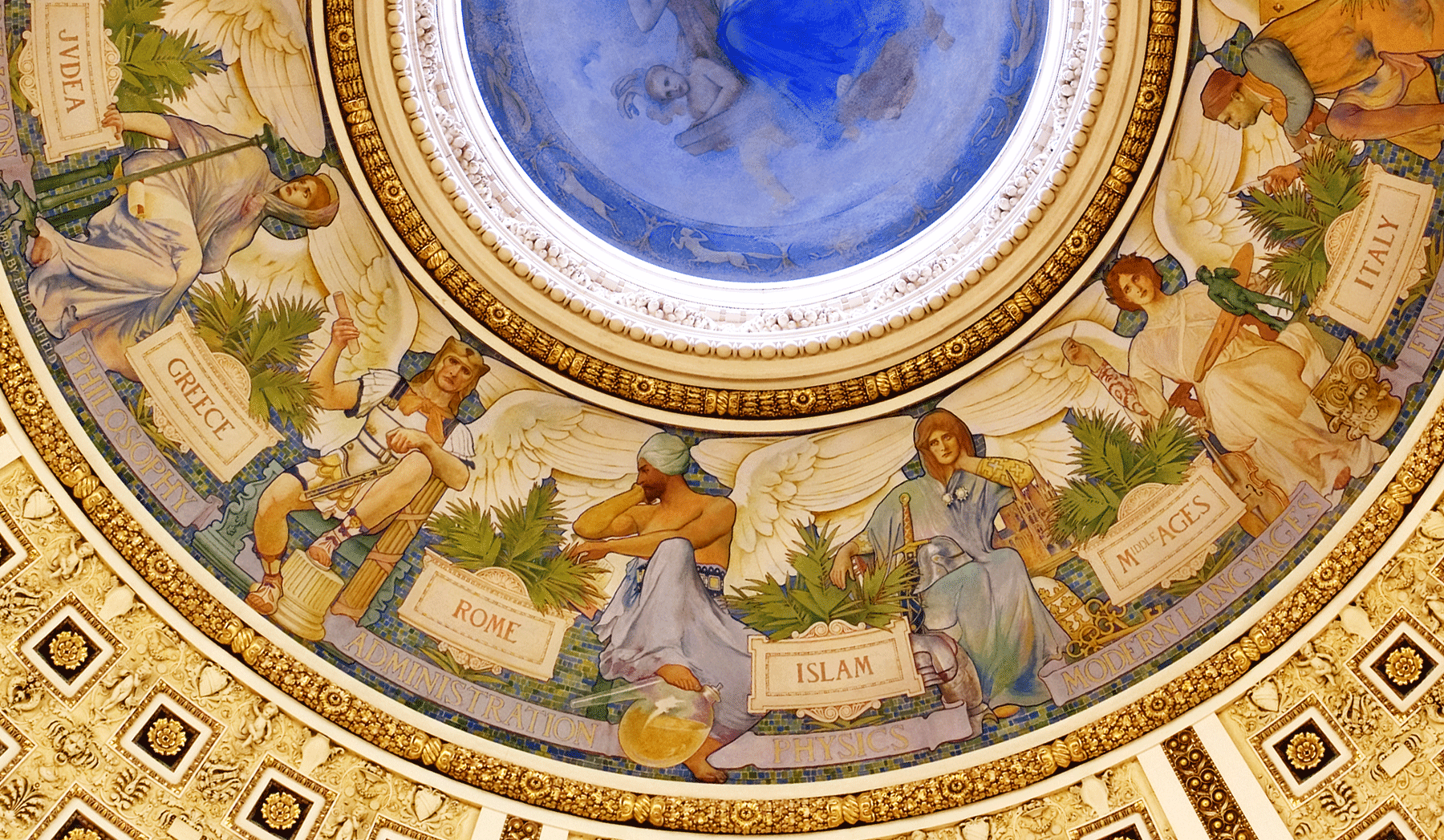 The Library of Thomas Jefferson

Walk East into the Library of Congress' Rare Book and Special Collections Reading Room. Here, amidst Jefferson's personal library, one finds a two-volume copy of the Qur'an, translated by George Sale and initialed by Jefferson himself. Jefferson purchased the Qur'an in 1765 while studying to be a lawyer. The copy of Qur'an entered public awareness in 2007 when it was used during the swear-in ceremony by Representative Keith Ellison, the first Muslim to be elected to the US Congress.

Ellison said that using Jefferson's Qur'an made an important point: “It demonstrates that from the very beginning of our country, we had people who were visionary, who were religiously tolerant, who believed that knowledge and wisdom could be gleaned from any number of sources, including the Qur'an. A visionary like Thomas Jefferson was not afraid of a different belief system. This just shows that religious tolerance is the bedrock of our country, and religious differences are nothing to be afraid of.”

That, perhaps, is what this tour can teach us. More than anything about Islam, these symbols are about America. They are about openness to acknowledging America's debt to a shared human heritage, a concept that seems to have been all but forgotten in today's environment.

It is perhaps a lesson equally applicable now to both America and many Muslim-majority countries: it is only by recalling the best of our principles and traditions that we can defeat the worst of them. 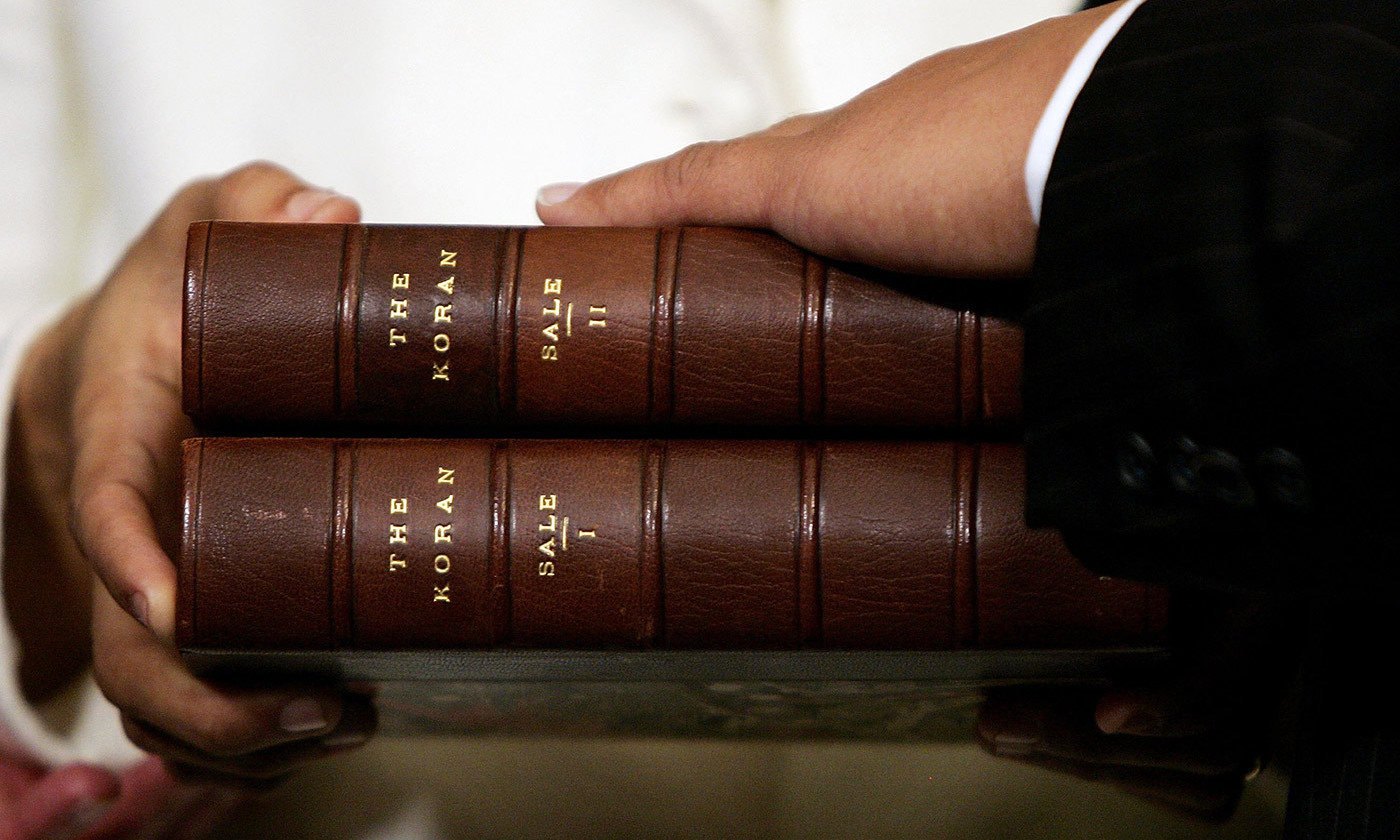 Mother Who Inspired IslamiCity Passes Away

Joe Biden on the Muslim Ban

The Origins of Islamophobia

Unity in Multiplexity: Islam as an Open Civilization

How Modern Mathematics Emerged From A Lost Islamic Library

Dec 5-6: The 7th Annual Islamic Arts Festival (Online)
COMMENTS DISCLAIMER & RULES OF ENGAGEMENT
The opinions expressed herein, through this post or comments, contain positions and viewpoints that are not necessarily those of IslamiCity. These are offered as a means for IslamiCity to stimulate dialogue and discussion in our continuing mission of being an educational organization. The IslamiCity site may occasionally contain copyrighted material the use of which may not always have been specifically authorized by the copyright owner. IslamiCity is making such material available in its effort to advance understanding of humanitarian, education, democracy, and social justice issues, etc. We believe this constitutes a 'fair use' of any such copyrighted material as provided for in section 107 of the US Copyright Law.